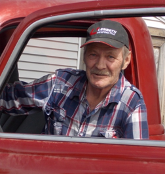 It is with sad hearts that we announce the passing of Murray Wayne Lovell on July 24, 2020. Wayne had suffered with cancer since 2018 and it finally overtook him. He has requested no memorial service but will be interred at the Stone Church Cemetery in Wishart, Sk. at a later date.

Wayne was the second eldest of twelve children born to Ray and Ruby (Nelson) Lovell on April 1, 1951 in Lestock, Sk. and he was raised on the family farm near Wishart.

Wayne had a good sense of humor and he was kind and generous. He would do anything for you. He was a pretty good cook and liked to garden: he also loved his flowers. He loved his solar lights and yard sales where he would pick up all sorts of trinkets. And if you knew Wayne, you knew he liked to prank.

Wayne attended school in Wishart although he didn’t graduate. He worked for many farmers around the district and he had many good memories of the people he worked for.

He met and married his wife Penny Erickson at an early age. Although Wayne and Penny separated when the children were younger, they had four beautiful children of whom Wayne was very proud and who he loved so much; Darren, Trevor (Carrie), Amber (Tyler) Lindgren, and Colin. The family grew even more as four grandchildren were born; Jordyn, Colten, Paige, and Ella. The grandchildren brought many smiles and so much joy to Wayne.

Wayne had many jobs throughout his life; baker, milk truck delivery, Globe and Mail delivery, security guard. He also worked in Uranium City and various Northern communities. His last line of work was road construction in which he operated his favorite piece of equipment, a DC-8 Cat. He was helpful in building the Alaska highway. He fell in love with the scenery and the Alaskan way of life and it was his plan to return there but it never happened. During this season of his life he lived with his cousin and Brian (Rose) in Whitehorse, NWT for a while as well as his cousin Karen and her kids. He enjoyed them very much.

Wayne returned to live in Saskatoon for a while and then moved out to Unity where he lived out the remainder of his life. During his years in Unity he helped out at the family business of his sister Shirley and her husband Dale.

Rest in peace Wayne where you are free from pain. We will cherish our memories of you!