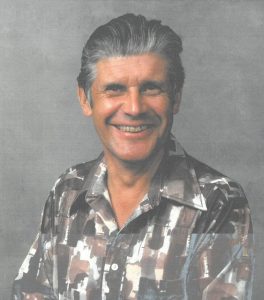 It is with sadness that the family of Burton Sinclair of Prince Albert announces his passing on July 10,2021.

Burton was the youngest child of Robert(Bob) and Elizabeth(Lizzy) Sinclair of MacDowall, SK. He was born February 23, 1936 at the home of his grandparents, Alfred and Mary Smith.

As he was growing up, he was known for his friendly disposition, creative thinking, playful sense of humour and his ability to fix almost anything mechanical.  He was a fierce cribbage player and the undefeated champion of the license plate game. This was one of several games played while travelling with his family and dog, Chu Chu.  His all-time favorite trips were the camping trips to Mexico and across Canada.

Burton’s line of work was a natural extension of his love of mechanics.  He did construction work in BC, Alberta, and Saskatchewan.  During this time, he was known as Hiawatha.  When he started his own business-Sinclair Construction he became known for the quality work he did in many areas of Saskatchewan.

Burton married Carol Orton and they were blessed with one daughter, Cindy- his pride and joy.  They lived in Rosthern for many years.  After he moved to Prince Albert he continued in the same field of work until the age of eighty-two.  He still had a zest and passion for life and enjoyed his family, cousins, nephews, nieces and special friends.

Burton leaves to carry on his legacy, his hearty laugh, his ability to laugh at himself, his invention that salt fixes everything and his passion for life to his daughter Cindy Sinclair- Urquiza(Hernan),granddaughters Heidi(Kyle) Wilkin and Morgan Urquiza, great grandchildren Nathan Spencer & Preston Wilkin.  Also, he is survived by Cindy’s mom, Carol Sinclair whom he remained friends with to this day, and special friend Tina Doris Janvier.  Also, to remember him are his many nieces and nephews, and great nieces and nephews that held a special place in his heart.

He was predeceased by his grandson Lyndon Urquiza on March 26th, 2021. Burton was the last one in his generation so he is welcomed into heaven by his parents, Robert and Elizabeth Sinclair, siblings Dave(Betty) Sinclair, Jean(George) Ramsey, Evelyn(Gerald) Christianson and Joe Sinclair and nephew Rick Sinclair.  He is also reunited by nephew Howard Ramsey (July 24/2021).

One response to “Alfred (Burton) Sinclair”