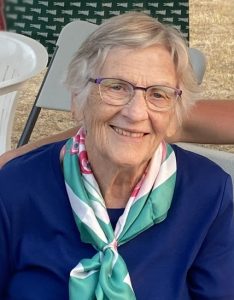 Alice Jane Kroczynski passed away peacefully at St. Paul’s Hospital in Saskatoon on the morning of February 6, 2022. She is survived by her devoted husband of 64 years, Rick Kroczynski, her children, Jim (Deb), John (Deb), Tom (Jackie), and Patty (Stéphane), her 16 grandchildren, and five great-grandchildren. She was predeceased by her parents, Charles and Ellen Meagher, her two brothers, Chuck and Tom, and a beloved nephew, Young Chuck.

Alice will be remembered first and foremost as a loving, caring, and attentive wife, mother, aunt, and grandmother. She was also a steadfast and thoughtful friend, remaining connected throughout her life to members of the SPH Nurses Alumni group. She loved to sew and knit, to play the piano and the organ, to read any manner of books, and she was famous for her canned peaches, dill pickles, and butter tarts.

Alice was born in Delisle, and, with her family, took a detour through Kinley before settling in Saskatoon as she was starting school. She attended St. Joseph’s Elementary, where she skipped grade four to join her brother Tom in grade five, and was a proud graduate of Nutana Collegiate, showing her support for her alma mater most recently by attending its 100th anniversary in 2010. In 1952, she began training at St. Paul’s Hospital School of Nursing, and graduated in 1955. She married Rick in 1957, and, in 1958, started to raise a family that grew to four kids by 1971.

After a brief stint in Melfort, where she and Rick tried their hand at running a 24-hour gas station, they settled in Vanscoy in 1977 before moving to an acreage nearby in 1980. In Vanscoy, Alice became an active member of the community, taking a job at the village post office and assuming the position of organist at St. Francis Xavier Roman Catholic Church, where she and Rick provided the music ministry for more than 20 years. She loved their life out on the acreage, in every season, and was granted her wish that she never live anywhere else.

Alice’s family would like to thank the staff of St. Paul’s Palliative Care unit for their care and kindness during her stay there. In lieu of flowers, please send donations in Alice’s name to Hospice at Glengarda through the St. Paul’s Hospital Foundation.

A funeral Mass will be held on Friday, February 11, at 1:00 p.m. at St. Francis Xavier Roman Catholic Church in Vanscoy.