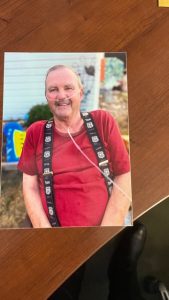 Art grew up on a farm outside Sonningdale, SK with his parents Ron and Edith Gunness, his sister Eileen and brother Cliff.  He left home in 1969 for work in Edmonton with many local friends. He worked briefly for BPOC before he and several of them got work on the oil rigs. Rigging life consisted of hard work, long hours, big money and drinking hard on your days off. Art always found time to come back to Sonningdale to help his mom and Uncle Delbert with the farm. He could also always be counted on to help out friends and neighbours with whatever needed doing; labour, rides, loaning money or buying drinks. Rig work took him from the prairies to the Beaufort Sea, Oman, Saudi Arabia, Kuwait and Venezuela.  While on days off, after downing a few, he would make long, rambling phone calls to friends, sometimes family and in at least one instance, a total stranger by misdialing, who ended up becoming a friend.

In January of 1995, after several unsuccessful attempts and with the help of Thorpe Recovery Centre, Art was finally able to quit drinking for good. He had taken over the family farm when his mom moved into Sonningdale a few years earlier. He lived a quiet bachelor life until 1998 when he found the love of his life, Connie. Art was a wonderful step father to Connie’s three daughter Ang, Sheila and Julie, and a doting grandfather to Ang’s then toddler, Ryley. He was often heard bragging about what an amazing young man Ryley grew to be. Years later, his family grew even bigger with the addition of Sheila’s husband and three sons, as well as Julie’s fiancé and son. He enjoyed being a grandfather, always full of laughter and smiles when his grandsons were visiting or telling him stories during video calls.

After 38 years on the rigs, Art stayed closer to home, working first for the R.M of Eagle Creek before retiring in 2016. He then bought a trailer and he and Connie travelled across Canada, and twice spent their winters in Yuma.

Art started feeling sick in the fall of 2019 and was eventually diagnosed with lung cancer in April of 2020. Connie kept him at home, taking great care of him until driving him to Unity Hospital on November 24th. He spent his final week surrounded by family and incredible staff.

He is predeceased by his parents, Ron and Edith Gunness; his brother Cliff; Mother- in- law Helen Mailloux; brother-in-laws, Joe Baptist and Danny Ritchie; sister-in-law Susie Gunness, and sister in law Marlene and Edward Sagatcheway.

The Memorial Service and Internment will be held in Sonningdale in the spring of 2022. In lieu of flowers, donations can be made to: