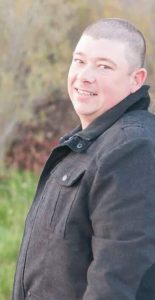 Barry was born Sept 8, 1977, in Saskatoon to Edwin and Margaret Nelson. He attended school in Warman and graduated in 1995.  He worked for a short time in the oil fields near St. Walburg, then returned to Saskatoon and drove truck for Saskatoon Processing.  He studied and became a power engineer in December of 2010. In early April of 2011 he started his career with Suncor Energy based in Firebag AB and worked there until his death.

On September 11, 1999 he married his high school sweetheart Tatum Doell. They had three children that Barry loved beyond words Aiden Dean (17), Brinley Riann (14) and Troy Lucas (12). He had two older brothers Chris and Shane who he looked up to and loved to be with any chance he could.  He treated his in-laws Chuck and Barb Doell like his own parents and his brother in law Ryan like a little brother to look out for.  He also leaves behind his beautiful nieces Tessa, Samantha, Mickenna, Jaida, Danika (poohbum) and Leah; and his very special sister-in-law Lorelei.

He will be greatly missed by many aunts, uncles, cousins and friends.

Say not in grief “he is no more” but in thankfulness that he was….