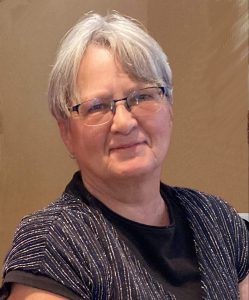 It is with profound sadness that the family announces the sudden passing of Beverley Jane Scheidt (Pegg) on September 17, 2022 at the age of 65.
Beverley was born in Kerrobert, SK, the second of five to Raymond and Bernice Scheidt. She was always fun to play with but was very determined to get what she wanted. Two instances come to mind: we were to go out and hill the potatoes at the farm and she decided she wasn’t going, no way and she won. Dad let her stay home. The other one, was Mom & Dad wanted her to quit sucking her thumb, many things were tried even the taking of her picture sucking her thumb, but she wasn’t going to quit- she did eventually.

She graduated from Arthur Geelan High school in 1974.  From there she went to Saskatoon Business College where she graduated with honours as a medical stenographer.  She also later in life graduated with a degree in business and political science, again with honours. She loved to read and learn new things.

One of her places of employment (where she worked until she retired) was the RUH. She worked in several departments, but I think her favourite was in the emergency. She had many different jobs and many stories to tell of things she was involved in.

She also decided there was a world out there that she wanted to see. She took two months off to travel to Africa and Egypt with some of her friends. Other places were Hawaii and Europe with family.

Bev was never afraid to move around the city. She lived in several different places which she made into a home where everyone was made to feel welcome. Her last home was on Preston Avenue where she not only acquired a home, but a friend who became her lifetime partner, Harvey Pegg.  One of the things Bev and Harv wanted to do was to get married and that took place on August 28, 2022. Harv and Bev were married 21 days and lived together for 21 years.

Auntie Bev (or Aunty Betty to some) was loved by all the nieces and nephews because she laughed, played, and spoiled them. She would have Dairy Queen birthday cakes, movies such as “Princess Bride”, “Lonesome Dave”, “It’s a Wonderful Life” and who could forget “Sound of Music”, and games.

After living for several years on busy Preston Ave. Harv and Bev decided they wanted a quieter, slower pace of life. Thus came the move to Pickerel Point and the building of a cabin. Bev always enjoyed camping and now she could live every day at the lake, fish all day long and live in the forest. She even decided that hunting was worth trying. She was willing to try most things (even windsurfing).

She loved cooking and trying new recipes. Her and Alan had a schedule on who was to cook they had a couple of recipe books they would try. When they didn’t think it was good, they would x the recipe and say “Boy, that was filling “ (so as  not to be rude).

For her 60th birthday she decided that she would like to take her three sisters on a road trip to B.C. to visit relatives and do some sightseeing (what a brave move).  We all had an adventure that we won’t forget.

Then for Alan’s 50th birthday she again thought it would be great to take her sisters on a trip to surprise him.  It was a great trip and a great surprise for Alan. The look on his face was one we won’t forget. Her and Harv also went on a road trip with Sherry and Chris. She loved family and wanted them to be a big part of her life.

Thanks, Bev, for sharing your life with us and giving us many more memories to cherish. You will be remembered by all who knew you.

Bev’s Memorial Service will be held at 2:00 pm on Saturday, September 24, 2022 in Cherished Memories Chapel, 591 Centennial Drive North, Martensville.
Interment of Bev’s Urn will follow on Sunday, September 25 at 2:00 pm at the Luseland Cemetery.

For anyone unable to attend the service in person, a livestream link has been set up at  https://funeraweb.tv/en/diffusions/61205