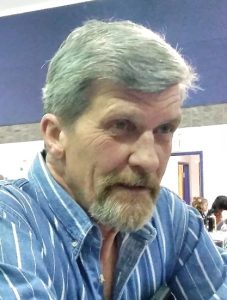 Blair Edward Haberman passed away peacefully on October 1, 2022 at St Paul’s Hospital. His wife was with him and his children were nearby.

Blair was born to Ed and Madeline Haberman in Winnipeg, MB on October 25, 1957, the second of 5 children. In the early 1970’s, Blair went to work with his Uncle Clarence laying underground water/sewer pipeline primarily in northern communities in Manitoba and Alberta. In April of 1982, he met his wife Sherri, and they were married the following year on September 3, 1983 in Turtleford, SK.  They settled in the Saskatoon area and Blair held various positions working as a diesel mechanic.

Blair and Sherri welcomed their daughter, Lisa, on January 23, 1986, and Robert on August 9, 1996.  Blair didn’t get to spend as much time as he wanted with them, but his children were the delight of his life.  They knew they were much loved.

Blair’s passion in life became fishing and camping, especially with a small group of his many friends.  They took several trips over the years to northern lakes and had the time of their lives whether they caught fish or not.

Blair acquired many acquaintances and made good friends over the years.  He was known for being an excellent mechanic, but also for being “a nice guy” who generously helped out anyone he could that was in need. Blair’s family will miss him dearly, but he will truly be missed by all.

Blair’s entire family would like to thank all those who sent messages, food, or gifts, or called and showed their support in any way. Those wishing to remember Blair may do so with a gift the Saskatoon Cancer Centre at RUH (20 Campus Drive, Saskatoon, SK, S7N 4H4.