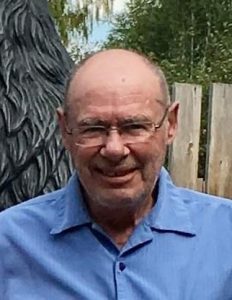 Brian De Back of Langham passed away peacefully and with courage with his family at his side on July 8, 2022. Born Nov. 1, 1947, in Chatham, On. Brian moved to Sk. as a young boy with his family. As an adult, he wore many hats working as a delivery driver, automotive repair, fibre optics tester, and in manufacturing. He referred to himself as a “Jack of all trades” because he knew how to do almost anything: plumbing, electrical, mechanical, and building. In retirement, Brian embarked on a new adventure. He was a “city boy” but found himself working on a farm for his close friends Doug Dear and Evelyn Paulson.  He absolutely loved it. He also enjoyed watching the rough riders and NHL as well as relaxing near the radio. He volunteered with the local fire department and played ‘old timers’ hockey. Brian was predeceased by his parents Jack and Emma De Back. He is survived by his loving wife of 54 years Lorraine, son Jason, daughter Cindy Walton, granddaughters Willow & Autumn Walton. Brian is also survived by his brother David De Back, sister and brother-in-law Colleen and Larry Olm, sisters in law and brothers in law Marlene and Cliff MacAngus and Cheryl and Gary Boyer. As per his wishes there will not be a funeral service.