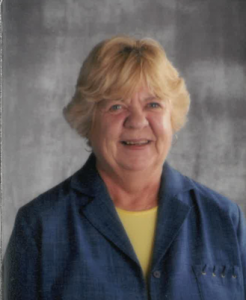 Carroll Joan Naphin (née Sawka) passed away in her home in Saskatoon on Thursday, February 20, 2020 at the age of 72.

Carroll was born and raised in Preeceville, SK.  She was the youngest of two children and had fond memories of growing up on a farm.  She attended Beaver Bluff School and Preeceville School.  Carroll obtained her Bachelor of Education and Bachelor of Arts in Psychology at the University of Saskatchewan.  Her early career in education led her to Swift Current, Red Deer, Saskatoon, and Ceylon.  Although she took time off teaching to raise her family, she later took on other part time work, most notably at the Prairieland Emerald Casino and as a substitute teacher in Saskatoon.  As a lifelong learner, she also took a variety of courses during this time.  In 1996, she obtained her Master of Education at the University of Saskatchewan.  Her second career in education as a school psychologist and counselor began with Shared Services in Prince Albert and area.  She closed her career in 2011 after more than a decade with the Regina Catholic School Division.  Her work was challenging, and she touched the lives of many children and colleagues.

Carroll married Robert (Bob) Naphin in 1971.  They raised two children in Saskatoon.  Carroll was an outstanding mother who juggled many roles including care provider, confidant, supporter, and problem solver.  She was strong-willed, good-hearted, and fun-loving.  Most people who knew Carroll fondly remember her ability to tactfully give well thought-out and articulate advice.  She was an avid Rider fan and also loved watching curling on TV.  She enjoyed reading, baking, playing cards, shopping, and travelling.  Memorable summer vacations were spent in Clear Lake, MB.  One of Carroll’s proudest moments was becoming a grandmother.  Her grandchildren were very special to her and she took pride in helping them learn and watching them grow.

Carroll was predeceased by her husband, Bob Naphin; her parents, John and Marie Sawka (Chalupiak); her in-laws, Patrick Naphin and Gladys Naphin (Tedeschi); and her niece, Angela Lindberg (Korchinski).  Left to mourn her loss are her daughter, Jill (Brad) Zdunich; her son, Joseph (Deanna) Naphin; along with her grandchildren, Logan and Janae Zdunich and Jude Naphin, as well as Drew Tillson and Eden Roberts.  Also mourning her loss is; her sister, Elizabeth Burke; her brothers-in-law, Patrick Naphin and Dennis Naphin; and her sister-in-law, Mary-Anne Naphin; as well as many nephews and nieces and their families.

The family would like to express our sincere gratitude to the staff of Preston Park Retirement Residence, where Carroll lived comfortably for almost seven years.  We would also like to acknowledge the staff of the Palliative Home Care Program.  In lieu of flowers, donations may be made to the Heart and Stroke Foundation or the Canadian Cancer Society.  Prayers for Carroll will be held at 7:00 p.m. on Friday, February 28, 2020.  Funeral mass will take place at 10:30 a.m. on Saturday, February 29, 2020.  Both Services will be held at Holy Spirit Parish, 114 Kingsmere Place, Saskatoon.  A private interment will be held later at the Columbarium at St. John’s Cathedral in Saskatoon.  Arrangements have been entrusted to Cherished Memories Funeral Services and Crematory (306-242-7888).