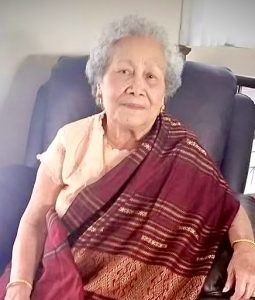 Chanhom was born to her father, Chankham and mother, Thip. She was born in Sikhaithong, country of Laos on July 8th, 1932.  She survived her siblings in order of births; Chansod (sister) Khamhod (brother), Chanhom, Bounthanorm (brother) Bountom (brother).  She lost both of her parents by the time she was 14 years old and was raised by various relatives.  In 1977 she and her family flee her homeland to neighboring country, Thailand. The family spent the next 3 years in Nongkhai, Thailand in a refugee camp.  It is there where she and her family came to know and accepted the Lord, Jesus Christ.  Her faith and spirit deepened through the years, and she trusted in The Lord.  In 1980, by God’s Grace, she and her family came to Canada through sponsorship of the Rosetown Alliance Church.  She spent the last 11 year living with her oldest living daughter Boualay in Saskatoon.  She had 7 children. In Canada, she is survived by four daughters, in birth orders, Boualay Sripaseuth, Khamvilay Rossow, Vi Noonan, and Channy Jung. Grand children: Khaikham (Katie), Somchai (Kevin), (Shelby) Alexandra, (Peter) Chandler, Christopher, and Caitlin. Great grandchildren: Khaila Bebe, and Tatum Charisma. In Laos country Grandchildren:  Bangon, Parn, Kigong, Theung. Great grandchildren: Ice, Smart, Nang Fa, Beckham, and Phonethip.

One response to “Chanhom Sripaseuth”