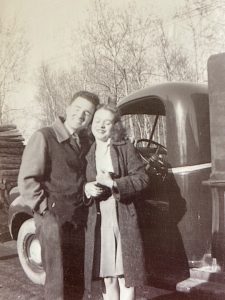 George passed away peacefully at his home on April 1, 2021 with family by his side. He was 92.

George was born on June 12, 1928 in Sioux Lookout, Ontario to Charles and Alice Hainsworth. Following graduation, George worked as a locomotive engineer for the CN Railroad for many years. He then became the National Vice President of the International Union Brotherhood of Locomotive Engineers. George travelled extensively across Canada and the USA for work. He spoke fondly of his trips to Europe to visit his daughter Alice and her husband Mike in Germany where Mike played hockey. After retiring, George sought out and reconnected with his high school sweetheart, Viola Folkes. After a 3-year courtship, they took us all by surprise and eloped to Vancouver to get married in 2001. Together they had a wonderful time travelling to Mexico, Hawaii, and across Canada. George and Viola were able to remain in their home until 2018 receiving assistance from Viola’s family and caring neighbours.

George was predeceased by his parents, brother Arthur, and stepdaughter Adele Crocker.

The family would like to thank all of George’s caregivers and most recently, the staff at Diamond House Senior Care Home in Warman, who provided warm and compassionate care over the past few months. At George’s request, there will be no funeral service.