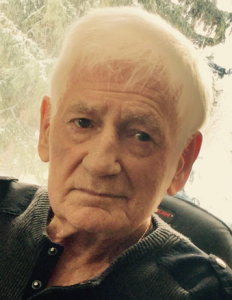 Recently of Prince George, BC, relocating to Saskatoon in 2018 to be closer to extended family.  A prairie boy who spent most of his working life in Alberta and B.C. Dale went on one last road trip, January 31, 2020, leaving no forwarding address for Melody (Strong) Harris, his wife of 46 years.

Dale was a brother, uncle, husband, father, grand-parent, great-grandparent and a loyal friend to many.  He was also a friend of Bill W.  Dale was a dedicated union tradesman.  Initially a Journeyman Ironworker Local 720; then a Journeyman Boilermaker, with a 44 year membership with Local 146, Edmonton, Alberta.

There will be no formal service.  Dale’s ashes, will be released where he requested: a gold bearing creek in BC, joining a river and eventually the Pacific Ocean.  Dale was a decades long prospector and was happy fishing from his boat during the time he and Melody lived on Vancouver Island.

Skate on, Dale, in that endless hockey game with no rules, no refs, and no call to stop for supper.

“In the end we are all just walking each other home.” Ram Dass

One response to “Dale Alfred Harris”