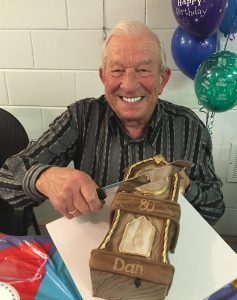 Daniel Martin Rybka, age 82, of Warman, SK passed away on Thursday, August 26, 2021, at St. Paul’s Hospital in Saskatoon with his wife, Darlene, and daughter, Melanie, by his side.

Dan was born on November 12,1938, in Prince Albert, SK, to Walter and Annie Rybka.  He moved with his family throughout his childhood between Prince Albert, SK, Steep Creek, SK and Edmonton, AB, eventually settling in Buckland, SK.  Dan became a baker by trade and worked at various bakeries in Prince Albert and Saskatoon.  He met his future wife Darlene in 1964 and they married on July 8,1966, at Shellbrook, SK.

In 1972, they purchased a bakery in Eston, SK which was known as Dan’s Bakery & Coffee Shop.  He supplied the community and surrounding area with baked goods until 1988, when they relocated to Saskatoon, SK and he continued working as a baker.  In 1991 they moved to Kelowna, BC where he continued working as a baker until 1995 when he had a heart attack and was unable to continue.  Even though retirement came early he kept busy looking after his flowers and garden plus their beloved dog Angel. Dan was an avid collector of clocks, watches, lighters and Mickey Mouse memorabilia plus being a Mr. Fix-It.  He also enjoyed his travels to Hawaii, Mexico, Disneyland and an Alaskan cruise.  In October 2020 they sold their mobile home and relocated back to SK, purchasing a condo in Warman, SK.

There will be a Celebration of Life (lunch provided) on Saturday September 25, 2021, from 1:00 to 4:00 p.m. at the Warman Senior Drop In Centre at 422 Peter’s Street, Warman, SK. Please note this is a casual get together and there are no restrictions in place as per Saskatchewan guidelines.

Donations may be made to the Ronald McDonald House, 1011 University Drive, Saskatoon, SK  S7N 0K4.