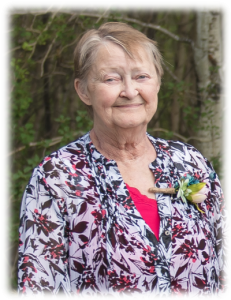 It is with great sadness we announce the sudden passing of our mother, grandmother, sister, aunt and partner Danella Waddington.  Danella was born August 4, 1945, in Montreal, Quebec to Stanley and Marjorie Waddington and would become the eldest of 6 children.  By 1964 she was living in Radisson, Saskatchewan where Danella married Isaak Derksen in 1965.  They had 2 children, William and Dwayne, before Isaak passed away in 1971. Following Isaak’s passing Danella met Ernie Robin.  They were together with sons William and Dwayne until 1981 when Dwayne passed away. Ernie and Danella separated by 1986. Danella met Dennis Woznik, who was her partner until her passing.  Danella worked at Goodyear Tire, Texaco, Hudson Bay, Autotec Oil and finally Sterling Crane where she retired in 2010.  Danella and Dennis spent the next years camping and travelling, when they could, across Canada and the USA.  Danella is survived by; son, William (Patti) Derksen; his daughter, Wanda Woznik (Ernie); grandkids, James Derksen and Ashly Derksen; his grandsons, Jesse Sawitsky (Kelsey) and Cole Sawitsky (Ariel); her sisters, Mickie (Ken) Cole and Judi Waddington; youngest brother, Stephen (Julie) Waddington, and numerous nieces and nephews.  Shortly after Danella’s passing her loving partner Dennis passed away.  Danella was predeceased by Isaak Derksen; son, Dwayne; parents, Stanley and Marjorie; youngest sister, Denise; eldest brothers, Jim and Marvin Falconer.  The family would like to thank the Royal University Hospital Nurses and Doctors for her care.  A Celebration of life for Danella will be held in the Cherished Memories Funeral Home Reception Room, December 21, 2019 at 2:00 p.m.  (591 Centennial Drive North, Martensville, SK.)