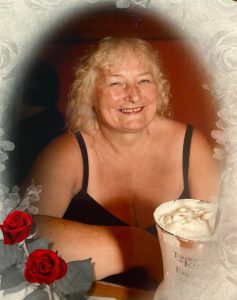 Debbie was born on May 6th, 1956 in North Battleford Saskatchewan. She spent her first few years growing up on a farm near Redfield, SK. At around the age of 9 the family sold the farm and moved into Saskatoon, where she attended school and graduated from Evan Hardy Collegiate. As a teenager she loved bowling and would often participate in championships in Saskatoon. She had the opportunity to join a bowling league again in Glaslyn later on, which became one of the highlights of her week. After high school she then became a receptionist for a short period of time in Edmonton, and then upon returning to Saskatoon worked at WRT where she met her husband Hank. Debbie and Hank were married on September 19, 1981 and moved out to live in Glenbush, SK. They built a house near the Dzialo family farm and have lived there for the last 40 years. Debbie loved farm life, she always planted a large garden full of potatoes, she prided herself on her landscaping, especially the stone wall that she built herself with her kids, with rocks gathered from the fields, and her firepit and park area. She worked in the fields, and took care of cows and chickens.

Debbie was very proud of her Ukrainian culture, and had many talents that she shared with her family and community. She embroidered many Ukrainian costumes for her own children, and also for many others. She was an excellent seamstress, an amazing cook, and she enjoyed writing Pysanka, music, dancing, and singing. Debbie always had time to support her children in all of their activities, whether it was Ukrainian dancing, drama, volleyball, baseball, or hockey, she was always there cheering and volunteering her time and talents for the community. She continued this with her grandchildren, attending and supporting as many events as she could.

One of Debbie’s favorite things to do was cook and feed as many people as she could. She worked several summers running the concession at Meeting Lake Regional park. Every year on Boxing day she loved to host as many family and friends in her home as would fit, feeding an amazing Christmas dinner and celebrating her favorite time of year.  In 1998, as a way to help fundraise some money for the Yevshan Ukrainain Folk Ballet’s tour to Ukraine, Debbie put on a dine and dance in Medstead. This was the beginning of her catering company that lasted 22 years. She didn’t have a name for her company the first few years, when asked what the name was she said “It’s just me and my kids”, and so, Me and My Kids Catering was born. She catered many weddings, dances, Christmas parties, and funerals over the years. Her food always had rave reviews and no one ever left hungry! She never had to advertise as word of her talents easily made its way around.

Debbie loved to travel, and took many trips with her children and grandchildren. Over the years they went to BC, South Dakota, Disneyland, Las Vegas, and many camping weekends.

Debbie will always be remembered by all who knew her as an amazing, hardworking, caring human being. She treated everyone as family, and shared all she had, even if it wasn’t much. She always had an ear to listen, advice to give, and time to help. She has left all who were fortunate to be a part of her life with many wonderful memories. A celebration of Debbie’s life will be held at a future date when we can truly honour her memory with laughter, community, and hugs.