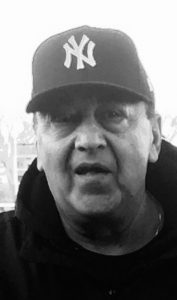 It is with great sadness that we announce the passing of Don Mantyka.  He is survived by his son and daughter-in-law Scott and Tina; his pride and joy grandchildren Bryn, Jaimyn and Denym; his sisters Joyce (Jim) and Elaine; his nieces Kim, Charma (Scott) and Joèl (Gregory); his great nieces and his dear friend Karen.  He also leaves behind countless friends and colleagues.

Don was predeceased by his son Chris, his parents Peter and Jean, and his brother-in-law Roger.

Don grew up in Saskatoon, attending Tech Collegiate.  He then went on to start his life-long career with the CN Railway, finally retiring after almost 40 years of service.  Don was also an entrepreneur.  He had many successful businesses over the years, most recently owning Vern’s Pizza and the Westley’s Jr. B Hockey Club.

Keeping busy running back and forth between the rink and the pizza store was his hobby.  He loved being part of both.  The rink was like a second home to him – any rink was.  He was a ‘coach’ to everyone he knew.  But what he loved the most was spending time with his grandchildren.  He would be at every game and practice.  Often being a chauffeur and always being the ‘fan-of-the-year’. He would be at every school event as well.  Whether at graduation or at the provincial finals, his cheer was always heard.  He was so proud of his grandchildren that he talked about them and their accomplishments non-stop.  Bryn, Jaimyn (J-bird as he always called her) and Denym were his passion.  He repeatedly said his life was complete because of them.

Don was the first to lend a hand, a dollar, or his advice to anyone who needed it.  He made sure everyone was looked after.  He’d drive around from house to house before bed making sure all his family’s vehicles were home and everyone was safe and sound. He loved being a big brother to Elaine and Joyce and adored being ‘Uncle Don’ to his nieces and their families.    He cherished family gatherings.  Don was the type of man to dress up as Santa for his two boys and his nieces, then eventually for his grandchildren.  He was so excited to give presents that he could barely make it to Christmas eve.  He loved to host backyard pool parties for his family and friends.  His fridge was always full and his pool was always hot.

Don was an incredible father, grandfather, brother, uncle, coach, and friend.  He was a true mentor both in business and in the hockey community.  This world was a fantastic place because of his generosity, his kindness and his presence.  He will be dearly missed by all.

As per Don’s wishes, we will be having a small private family gathering.  In lieu of a celebration please think of Don while you hug, appreciate, cherish and spend quality time with your family, teammates and friends.