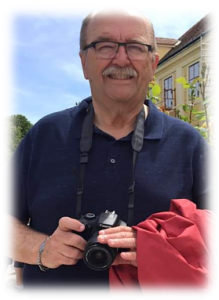 Pat was born in Regina, SK on August 28, 1949.  He grew up in rural Saskatchewan living in Estevan and Edenwold before spending most of his childhood in Whitewood. After attending high school in Regina, Pat served in the Regina City police for 2 years before joining the RCMP. In his first posting to Prince George BC, Pat met his one and only, Wendy.  They began their adventures through the Northwest Territories and while stationed there, their children Tim and Katie were born.  After postings in both the NWT and Yukon, they were transferred south to Manitoba spending time in Winnipegosis, Melita, Lynn Lake and Dauphin where Pat and Wendy eventually retired.  They moved to Martensville in 2018.

Pat had many interests in life.  He had a life-long love of hockey as a player, coach, and volunteer.  He loved to read, fish, and work with wood.  Everyone who knew him likely has a wooden bowl spun with care on Pat’s lathe. His biggest love in Iife though was his family.  Summer camping trips were always a highlight and many hours were spent on the road doing family road trips.  He was a loving husband, dedicated father, and wonderful grandfather.

Pat is survived by Wendy (nee Robinson), his wife of 44 years, son Tim (Sharlene), daughter Katie (Alex), brother Ross (Carol) and sister Sheila.  He also leaves behind his grandchildren Liam (13) and Bridgette (6).  He will be missed by the Robinson family and numerous nieces and nephews.   He goes to heaven to join his father TD “Mac” McKay, mother Margaret, Brother Murray, sisters-in-Law Muriel and Avonda, brother-in-law Geoff, and niece Shannon.

A Memorial Service will be held July 13, 2019 at 11:00 a.m. at Cherished Memories Funeral Home – 591 Centennial Drive North, Martensville, SK.  In lieu of flowers, donations can be made to the St. Paul’s hospital foundation Palliative Care Campaign at www.sphfoundation.org.