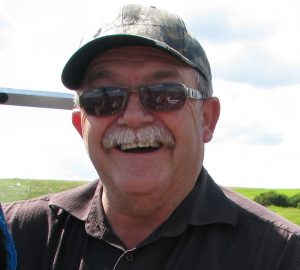 Don passed away with his family by his side on Monday, January 7th, 2019, at the age of 67.  Don will be remembered, by all who met him, as caring, generous, dependable, resourceful, and wise.  Those who knew him well will add shit disturber to the list.  Don wore many hats in his life, husband, father, grandfather, brother, uncle, friend, and mentor, but the ones he wore the most were the ones to keep the sun out of his eyes…and off his bald spot.

Don was born on October 26, 1951 to Walter and Edie McKibbin. He was the middle child between Garry and Joyce.  According to Don, being the middle child also made him the smartest.  Don could make friends anywhere he went.  He and those friends proceeded to wreak havoc in the Whitefox area until he moved to Edmonton in 1972.   It was in these younger years that Don learned many of the “Do as I say and not as I do” life lessons that he would pass on to his children.

After moving to Edmonton, Don met his future wife Mary, who had also moved to Edmonton from the Nipawin area.  Don and Mary knew after their first date that they had something special and were married on May 14, 1977.  They spent the next 41 years together living, learning and creating a wonderful life, which included two (usually) amazing children, Kathy and Bradley. A great joy in the last nine years was his favourite grandchildren Ryland and Melanie.

Before starting Active Auger Services with Mary in 1978, Don was a jack-of-all-trades and a master of none.  As a boy he delivered papers, did janitorial work at the school in Whitefox, and as he got older he did diamond drilling while hanging off the side of mountains and rat hole drilling in the arctic.  After selling Active Auger in 2001, Don continued to pass his wisdom and knowledge to others while working for Pinter and Associates and Venture Construction.

Don will be forever remembered as always having an appropriate quote for every situation and a story to tell (not always appropriate for all audiences).  Don was happiest out on the water with a fishing rod in hand while watching the enjoyment that his family and friends got out of fishing along side of him.

The quote “one man’s junk is another man’s treasure” hit very close to home for Don.  From old boats to woodworking, Don and Mary always had a refinishing and/or re-purposing project on the go.  When Don wasn’t fishing or working on a project he enjoyed catching up with friends over coffee.

Please join us on Friday, January 11, 2019 for a brief service and celebration of Don’s life.  The service will be at 1:00 pm with coffee to follow until 4:00 pm at Cherished Memories Funeral Home in Martensville, SK.