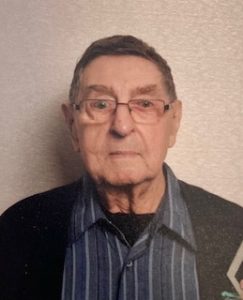 Don was born in the City Hospital and died at Glengarda Hospice at the age of 92.
He is survived by his wife of 53 years, Elaine: son Ross (Erica) and 3 children of Mara, B.C.;
Daughter Wendy Bernard, Airdrie, AB; sister-in-law Lynda Baran of Saskatoon with whom he was very close; many nieces and nephews;
​​​​​​​and good friends Joanell and Wally McGunigal who Elaine and Don were together on hundreds of happy occasions.  He was predeceased by his brother Lewis, sisters Joyce and Laura and many good friends and co-workers.
Don was an excellent swimmer, lifeguard, and member of the Boxing Club at the YMCA and with friends when they were young and foolish, used to dive off the Grand Trunk Bridge into the river just for the fun of it. He was a member of the Prairie Dusters Motorcycle Club and had a 65-year pin from the Army and Navy Veteran’s Club. He loved dancing, polkas being his favorite.
Besides hunting and fishing, Don also played hockey, softball, bowling tennis and enjoyed watching golf and football on TV in his later years. He was a long-time employee of Northern Distributors and an award-winning driver with American Van Lines. Later he worked at Baron Moving and Storage.
Along with more than 150 trips by car and airplane to Las Vegas and enjoying so many free rooms and meals, Don was made a member of the Gamblers Hall of Fame at the Fremont Hotel.
He will be missed by all for his helpful and caring ways, truly one in a million.

One response to “Donald Wright McEown”