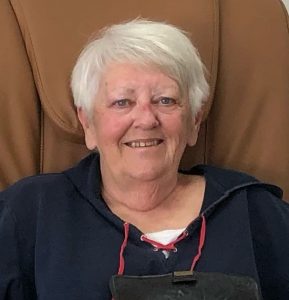 Marilyn passed away in the Palliative Ward of the St. Paul’s Hospital in Saskatoon on Monday April 12, 2021.

Marilyn was born in Calgary, Alberta, into a close-knit extended family. She often told stories of family outings and holidays spent together, including many great memories of time spent in Bragg Creek. As was typical of her generation, she graduated with her nursing certification, but found nursing was not her calling. Throughout, she had a zest for life and for seeing the open road. From the time she was little on many family trips, to her later years, packing up in a motor home and heading east to follow her Nova Scotia roots.

Marilyn was known as “Mom” to many more than just Carolyn and Bill. Her maternal influence was felt by the youth she spent many years chaperoning at the Calgary Stampede and during her time with “Hidy & Howdy” at the Calgary Winter Olympics.

She was living in Calgary when her brother Dan fell ill with cancer and was his primary caretaker as things progressed toward hospice care there. It filled Marilyn’s heart with joy to see Dan reconnect with his own children and first grandson.

History and genealogy were hobbies that were inspired by her travels and she could recite names, dates, and historical references up and down both sides of our family tree. This passion was also the inspiration for an unforgettable and very special trek Marilyn organized with her cousin, John.  Sixty-six adventurers who shared a common ancestor cross back over the pond from North America to place a new headstone at the church cemetery of one of our common ancestors in the village of Chaffcombe in Somerset England in 2014.

A related passion project that grew out of her genealogical research was the sharing of stories of our direct family who were killed or died as a result of combat in the First World War. She was so touched when her grandson Mark, who has also studied military history, accepted the responsibility of seeing her most recent manuscript published in her memory.

As time progressed and Marilyn experienced some health challenges, she moved to Carolyn and Shane’s ranch near Saskatoon to live with them and further deepen the family’s prairie roots. She enjoyed the busyness of farm life, such as the visitors who stopped by and chatting with grandkids about their hopes and dreams. She loved to see us out riding, and to sit out and watch an epic prairie sunset. There was always Crown Royal in the cupboard and one of the dogs snoozing at her feet. Marilyn enjoyed many family dinners with Bill’s family, including annual trek to Pike Lake for a fall picnic breakfast.

We all had a very special visit at the ranch for several days when Marilyn’s “baby” sister Suzanne and her husband Mike came to stay in 2019. We were so shocked and saddened not only by the sudden loss of Suzanne following surgery in January 2020, and mom was not able physically to make the trip for the funeral. Who knew that just a few short weeks later the whole world would change for all of us…

While we were so vigilant to protect Marilyn from exposure to COVID, we were unprepared for the rapid decline that was ultimately diagnosed as advanced stage cancer. Right up to the end she remained positive about a life well lived without regret. She wanted to share this: “Do not stand by and watch me go; but come with me on this journey.” She said she was not afraid, but rather more curious than anything else. The move to palliative care meant that she was able to see not only Carolyn, but the rest of Carolyn and Bill’s families as well. We were there to comfort her in her final hours as best we could.

The family wishes to let everyone know that when we can gather, and borders are reopened, we will plan a wake and get together in Bragg Creek, Alberta to celebrate the lives of Marilyn and her sister, Suzanne, with all who are able to join us.

In lieu of flowers, donations in Marilyn’s memory can be made to the Palliative Care Unit at St. Paul’s Hospital in Saskatoon https://www.stpaulshospital.org/foundation/donate/donate.php