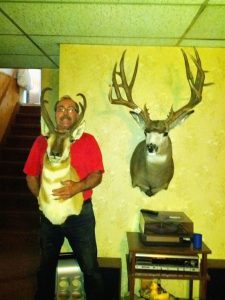 Doug passed away at his home in Saskatoon after a lengthy and painful battle with cancer. Thanks to a wonderful Palliative Care team he was able to be at home with his family by his side. He is survived by his wife Laurie, daughter Nicole (Ryan) Kobelsky and their children Chloe and Hannah; daughter Dani and her daughter Reanne Brenner. Also survived by his mother Joy Miller, brothers Darwin, Clayton (Tammy) and Jason (Rachelle); and sister Patti (Dave) Sawchuk and nieces and nephews; his “spare daughter” Sam Yachiw (Joe Omelian) and the Stokes clan (Laurie’s family) who had always treated him like another sibling. He was predeceased by his father Charles Miller and his Grandparents Frank and Eva Holdner.

Doug started school at Strawberry School near the family farm. When his family moved to Young he continued his education there. Due to severe injuries sustained in a car accident he did not complete grade 12 but was very proud to obtain his GED at a later time.

He was an avid outdoorsman. He loved hunting and fishing or just plain being out in the country. He spent a great deal of time in his camper/summer home which was located in a neighbor’s yard near the family farm. He enjoyed farming and was grateful to be able to keep his Class 1 licence long enough to help his brothers with last year’s harvest. His last trip to the farm was this spring where he got to visit with his brothers and friends and see the spring calves.

His wife and children always came first in his life. When his job with the CN started moving him farther and farther away from home to places he couldn’t take his family, he gave up the job he loved to be home with them. After that he had several jobs including long haul trucking and semitrailer technician. He was employed as a shunt driver with Basic Truck and Trailer when he was forced to quit work because of his illness.

Doug was a beautiful old time dancer and in fact met his wife because of that (she was the only one there who could do a polka and an old time waltz). He and Laurie would take Nicole and Dani to Danceland in Watrous where Laurie would teach them how to keep time to the music and Doug would teach them all the old time dances which he had learned from his Grandparents Frank and Eva.

Summers were largely spent camping at Cypress Hills where he would set up a tent and dining shelter which could withstand any weather.

His ability to fix almost anything was legendary and he was willing to help anyone who needed it. His ability with plants was amazing. He kept a geranium Nicole had started in high school alive for over 20 years. He loved roses and his front flower bed was always a neighborhood showpiece.

His children were his pride and joy. He was so proud of the parents they became saying he must have taught them their parenting skills.

He and Laurie celebrated their 40th wedding anniversary on August 30th, 2020. Due to Covid they were unable to take the trip they had planned but Dani and Nicole arranged a celebration in the backyard with their wedding party.

Doug was very social and made friends wherever he went. His outgoing personality, quick wit and willingness to help anyone in need endeared him to all he met.

There will be no service at this time but once restrictions are eased there will be a public celebration and his friends and family will all be invited to have a drink on Doug and tell stories.

In lieu of flowers, donations can be made to STARS or the Palliative Care program (St. Paul’s Hospital Foundation) in Doug’s memory.

Doug – The Hunter, our Hero and the Heart of our Family. Loved and missed forever.