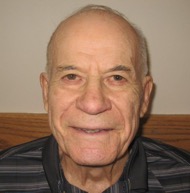 Edward passed away July 16th, 2019 at Luther Special Care Home.  A small graveside service will be held in the future.

Edward was born on the homestead farm near Viscount, SK.  He married Sharon Howes June 21st, 1969.  They lived in Saskatoon where they raised their children.  Edward was a farmer and commuted to his farm by Viscount, working Monday to Saturday and coming home to spend Sunday with his family and attend church.

Edward was diagnosed with dementia/Alzheimer’s which forced him to retire from farming at the age of 79. He moved to Trinity Manor in June of 2017 and then moved to Luther Special Care Home in March of 2018.  Edward was an active member of Zion Lutheran Church and Louise Avenue Congregational Church.

Special Thanks to the staff at Trinity Manor and Luther Special Care Home for the care they gave Ed and for enjoying (putting up with) his sense of humor, continuous teasing and his jokes!

In Lieu of flowers, donations can be made to Alzheimer Society of Saskatchewan.