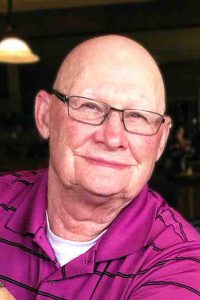 Eldon Was born on September 24, 1943 in Euguene and was raised in Coosbay, Oregeon. He graduated from Marshfield High in 1961, entered the US Navy and fought in the Vietnam war, and then went to college to become an electrician.

IN 1972, he came to Canada to build and run a saw mill for the North American Stud Co. While there, he met and married Debbie Welch and they had two children. Eldon and Debbie left Slave Lake  and moved to Kinsella, Alberta and bought a general store.

Later, Eldon worked in the oil patch as an operator and later a foreman. He worked until age 70 and then retired. He enjoyed hunting, fishing, and golf. Eldon also went for coffee every day with the boys.

Eldon is predeceased by; his father, mother and stepfather; brother, Darryl; and daughter, Becky.

Memorial Service was held at 2:00 p.m. on Friday, November 2, 2018 in the Delisle Community Chapel, 417-2ndStreet East, Delisle with interment to follow at Donavon Cemetery. Following interment, lunch took place at the Delisle Senior’s Centre. Donations in honour of Eldon may be directed to the Donavon Cemetery.