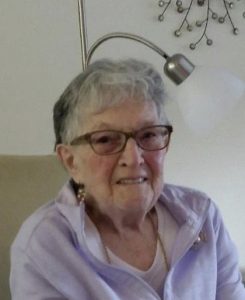 Ethel Florence Bakker peacefully passed away on Saturday July 4, 2020 surrounded by the love of her family. Born March 10, 1930 to Pauline and Raymond Montgomery Ethel was predeceased by her brother Robert (Annette Hoffos), morning and sister Myrtle (Gordon Ford). She is survived by her sister Mary (Frank Lawley) and brother William who still lives on the Montgomery farm. In April 1949 Ethel married Henry Bakker Jr (deceased 2014). Together they farmed in the Kilmeny School district, later renovating the school into their home where they raised their five children – Linda (Bob Davis), Sharon, Debra, Janice (Bernie Schultz) and Dennis (Solange Fontaine). Known to all who knew her as a beautiful, caring person Ethel was all about family. She was a sweet grandma to six grandchildren – Nihme, Krys, Eliza, Henry, Rachael, and Gillian. She enjoyed five great grandchildren – Katrina, Tosh, Louise, Lila and Miles. Ethel was a strong helpmate to Henry and her family. Together they raised a large garden and lots of chickens. She was tough. Whether it was serving as ”grease monkey” in the garage business or driving a grain truck on the farm, Ethel could be counted on to pitch in, as well as get meals on the table -with home made bread and pie! She later went to work at Honeyboy Bakery, The Bay, Adilman’s Department Store and Zellers. Travelling with Henry on many camper and bus trips, Ethel developed an appreciation of rocks, developing her skills in collecting, polishing and using them to create jewelry. She loved snowmobiling. She often went hunting and fishing with Henry. Ethel still holds the family record for catching the largest fish. Later in life Ethel enjoyed adult colouring books, always having one handy by her side. She loved knitting and crocheting, growing flowers and watching birds. This lovely lady will be missed. She was amazing.