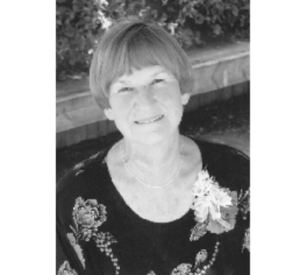 A celebration of Evelyn’s life will be held at the Centre for Spiritual Living, located in Windsor Chapel (704 Windsor St.) on Saturday September 21, 2019 at 2:00 p.m. A reception will follow.

Evelyn was born on November 7, 1936 in Saskatoon. As a child she was full of imagination and creative play. She went to elementary school where she fell in love with drama and was involved in a number of plays. Later she completed high school at Technical School where she was trained as a book keeper, which later became her vocation.

Evelyn married Jim Keller in 1957 and they went on to have 2 children together. Evelyn loved family life and being a mother, grandmother and great grandmother. She volunteered at numerous places over the years including Brownies and she was a Brown Owl for a number of years.

Evelyn was happiest when she was out in nature. She loved walking and was an avid camper. She appreciated the beauty of both the mountains and Northern Saskatchewan and took every opportunity to get there. She delighted in animals and had a number of dogs over the years. She enjoyed birds and went on a number of bird watching hikes.

Evelyn was a voracious reader and a  creative writer. One of her stories about The Adventures of Making Chokecherry Jelly was featured on CBC radio.

Evelyn was a very spirtiual person and was involved with the Centre for Spiritual Living. This faith community was very important to her throughout her years.

Evelyn was preredeceased by her ex-husband Jim, her long-time friend Marv, her parents, Thomas Everett and Grace Green and her siblings George, Hazel and Betty.

Evelyn is lovingly suvived by her children; Terry (Howard) Lowe and Lori (Keith) Hughes; her grandchildren; Mitch (Jen) Lowe, Sarah (Justin) Lee, Jaylene Hughes, Tanner Hughes; and her great-grandchildren; Jacob, Addison, Eli, Makena, and Emeryn; her siblings Audrey, Bill (Ruth), Bob (Darlene), Heather, Doug, sister-in-law Mary; and many nieces and nephews. She will be missed by many relatives and friends.

In lieu of flowers, donations may be made to the Salvation Army 339 Ave. C South, Saskatoon, Sk. S7M 1N5