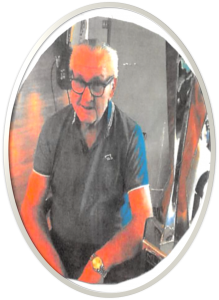 Our dad Gene Dlouhy, passed away, October 23rd in Saskatoon at the age of 93, with two of his children, Leeann and Guy, by his side,

and with his son Geno having just been there in some of his final hours. His daughter Tammy, could not be present re: Covid19 circumstances, but she was there in every other way. For our whole family, in the words of our Aunt Marina, ” He was a legend.” Born in Esterhazy, where many Dlouhy musicians were born and raised, he led his big band with his brothers and the CBC Happytimers in the 50’s. In the 60’s he led his 5 piece rock and roll band in Western Canada and beyond, turning down a recording contract in the US so that he and his brother Reg could continue to be the Canadian band they had become. Their cover of Moronie was a stand out amount many great recordings. They played the Trianon Ballroom in Regina, Temple Gardens in Moose Jaw, and people would crawl over broken glass to see them at Kenosee Gardens “(this quote from a primary source!). One of their career highlights was to go on tour as the opening act with Roy Orbison in the early 60’s. They often played the State Line Club on the border of North Dakota & Montana, the Golden Nugget in Las Vegas, and many of the Air Force Bases in Canada and the US, including Goose Bay/Labrador. Tonight, a brass and woodwinds section will come alive in heaven, as Reg’s saxophone and Gene’s trumpet reunite. Gene will always be remembered for the aura of joy he created in people.

One response to “Gene Dlouhy”