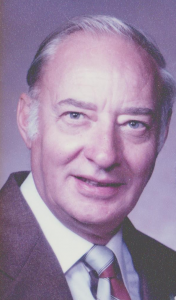 CHARMAN, Gerald Arthur 91, of Saskatoon passed away on September 7, 2018. He was predeceased by his first wife Yvette, mother Mary and father Gerald. Jerry is survived by his wife Eleanor, her children Derrick (Taletha), Trent and Kelly (Dean) and their children Colton and Cheston and Jerry’s children Guy (Gwen) and Karen (Dale) and their children Malory and Graig (Janna). Jerry was born in Winnipeg Manitoba on October 12, 1926. He relocated to Saskatoon in 1946 and married Yvette the following year. Jerry worked for American Optical as an optician for many years before branching out on his own. He partnered with the Optometrist company of Chaplin and Krueger until his retirement. In his younger years he played many sports and later coached both hockey and baseball. Many will remember Jerry for his quick wit and always a joke to tell (over and over). He loved puttering in his backyard, vacations to Arizona and watching sports. Gerald met Eleanor in 1986 and the two were married July 1988. They took many trips together and loved life. A celebration of Gerald’s life was held at Good Shepherd Lutheran Church, 1215 McKercher Drive on Wednesday, September 12 at 1:00 p.m. In lieu of flowers donations may be made to the SPCA, 5028 Clarence Avenue, Grasswood, SK S7T 1A7 of Osteoporosis Canada.