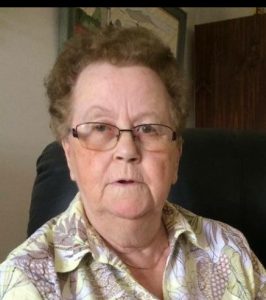 Gladys Jessie Anderson (nee Moonie) was born in Nipawin on October 5th, 1932.
She was the eldest daughter and one of thirteen children born to Alexander and Emily moonie.
Gladys passed away at St. Pauls Hospital Palliative Care Unit on May 31st, 2018.

Gladys grew up in the Blue Spruce district. Being the oldest girl she was a big help to her mom with the younger children.
In the late 1940’s Gladys worked for Mick and Thelma Lidster.
In December of 1949 she married Donald Anderson. To this union four children were born.
Don (Arlene) – Chris (Melinda), Jason (Ourayvanh), Aaron (Carly).
Dale (Leatha) – Scott (Renelle), Nicole (Dean).
David – Darcie, Cory (DeeDee), Devon (Aimee), Dexter (Meghan).
Cindy (Randy Brisbin) – Devon
As well as 16 great- grandchildren

Through the years Gladys worked in retail in various positions. She was also part owner-operator of the White Fox Cafe.
Gladys enjoyed curling very much, both playing and watching on T.V.
She enjoyed watching baseball as well.
Her and Delmar spent many summers at Pasquia Park near Carrot River. They enjoyed many rounds of golf as well as reconnecting with old friends and making many new ones.
The last few years Gladys and Delmar lived in McClure Place in Saskatoon and she enjoyed being part of the community there.
Gladys was an avid crib and bingo player. She also loved the idea that she could just walk down the hall and have her hair done.
I am sure Gladys will be remembered by many for her spunk and always telling you exactly what was on her mind.

Internment will be held at a later date.