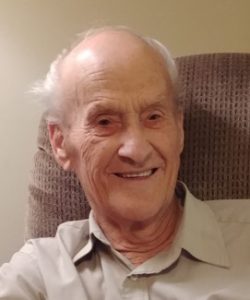 Henry S Thiessen,  92 years of Langham, Sk. passed away peacefully in his sleep on February 18, 2019. Henry was born and grew up on the family farm near Langham in 1926 and was the 12th  of 13 children born to Jacob and Susanna Thiessen.

Dad attended Edinburgh School in the Langham district and was very active in hockey and baseball. Those passions continued into his adult life. He was known to friends and family as “NHL Hank” and he spent his Saturday evenings with Hockey Night in Canada, cheering for his favorite team, the Boston Bruins and during the summer, the Boston Red Sox.

Growing up, dad helped out on the family farm until he took over in 1963. He continued to farm into his 90’s and could always be found in his garage on the farm going through his treasures until the very end. Dad was always a hardworking man and when he wasn’t busy farming, he worked for many different garages in Saskatoon and Langham, such as Busby’s Esso, Nortons, Roy Epp, Don Huggins, and Czanks, just to name a few. He always had a jigsaw puzzle on the go along with his Sudoku books. Dad’s childhood hobby was his beloved Meccano and collecting hockey cards and in his later years, Lego with his Grandchildren and Great-Grandchildren. Dad proudly owned every issue of the “Hockey News”, from the very first one published to yesterday’s issue.

Dad met the love of his life at a dance in the Legions Hall in Langham in 1952 and him and Gloria Stahl were married 2 days before his birthday on December 9, 1955. He said that mom was the best birthday present ever!

Dad and Mom had many adventures and laughs in their 63 years of marriage. He always looked forward to coming home from the field to his wife and family to a meal of his favorite foods, like Roll Kuchen, Plumamoos or Farmer Sausage with lots and lots of Ketchup.

In lieu of flowers, donations may be made to the Saskatoon Cancer Center, #20 Campus Drive, Saskatoon, Sk. S7N 4H4.

The family would like to thank the doctors and nurses at both St. Pauls and RUH hospitals, the Cancer Clinic, and the Langham Care Home for the excellent care they gave our dad.