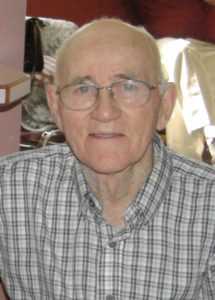 Howard was born in Biggar, SK to Julia and Albert Newton, the oldest son in a family of nine. In their large family he enjoyed sports and games with siblings and friends as well as gardening with his dad.  After Grade 10, at age 16, he quit school to take care of his family due to his father’s early death. Howard worked in a local hardware store before hiring on to the railroad. He married the love of his life, Hazel on October 21, 1953. Together they raised six children in Biggar, and family was always their pride and joy. Beyond his family commitments, Howard supported community projects including the health clinic, Co-op, Elks, church, Minor Hockey and New Horizons complex, however, his real love was carpentry as many can attest to.  After 37 years as a CNR brakeman and freight conductor, he and Hazel built a retirement home at Turtle Lake. They enjoyed lake life with family, friends, pets and wildlife for several years before returning to their roots in Biggar.

Howard had great people skills, both a gentlemanly manner as well as a playful knack for connecting with people. He also had a strong passion for the many dogs in his life.  He was talented and detail oriented with the projects and games he enjoyed including gardening, problem solving, cards and bowling.  He was a handyman and could often be seen riding his bicycle on his way to help neighbours with odd jobs.  He especially loved music; he twirled delighted partners on many a dance floor and he continued dancing and singing his favorite tunes into his final days.  He is survived by his children:  Judy (Leon), Janice, Murray (Margie), Cheryl (Roger), Donna (Murray) and Linda (Kelly) along with 14 grandchildren, 12 great grandchildren, and 2 great great grandchildren, as well as his brothers Raymond and Delmar. Now he has joined his beloved Hazel in their life after life. (She passed just weeks earlier on July 7, 2022.)

A joint Celebration of Life for both Howard and Hazel will be planned for a later date. Donations in lieu of flowers may be made to an animal rescue: We All Need a Rescue (WANAR) K9 Rescue or any Saskatchewan SPCA.

One response to “Howard Albert Newton”