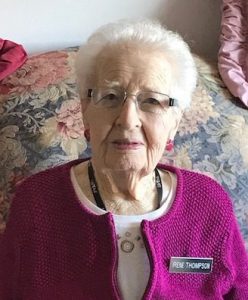 It is with deep sadness that we announce the passing of our Mother, Irene May Thompson, on Tuesday May 10th/22 at Luther Special Care Home.
Irene is survived by her children, Barry (Marian) Thompson, Janet (Curtis)Forstey, grandchildren Samantha (Michael) Lamborn, Michael (Jennifer) Thompson, great grandchildren Seth & Victoria Lamborn and Ben Thompson.  Also, Irene’s sister Betty (Dan)McGillivray, brother-in-law Ron (Bertha) Corrins, and many nieces and nephews.
Irene was predeceased by her Husband Howard in 2006, her great-granddaughter, Mienna 2019.
Irene (Torchy/Rusty) was born in Winnipeg, the middle daughter of 5 to George and Margaret Munro.
They moved to Saskatoon when she was 3 and in her youth was active in speed skating and women’s fastball.
She worked at Obe’s confectionary and the Gem café and after graduation from Tech worked for the Royal Bank.
Howard and Irene were married in 1953 and bought their brand new forever home in 1959 where they raised their family.
​​​​​​​She was a loving and kind mother, who had a full life and will be dearly missed by all.

The family would like to request donations on her behalf to: LuthercareFoundation, www.canadahelps.org/en/dn/9632

One response to “Irene May Thompson”