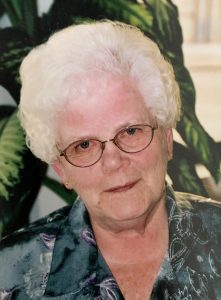 It is with sadness the family announces the passing of Iris with her daughters by her side at the age of 100.
She was predeceased by her husband Harry, son Ed, and son in law Ron.
She is survived by daughters Betty Cusson, Shirley (Vic)Rue, Marilyn (Ole) Jennett and daughter in law Mansje Sten, six grandchildren and five great grandchildren.
Her early years were spent in Macdowall, then moving to Prince Albert.  In later years she moved to Saskatoon to be closer to her daughters.
Iris was active in the Prince Albert Legion, as well volunteering in numerous other organizations over her life.
The family would like to thank all staff at Extendicare for their compassionate care of Mom.
In memory of Iris donations may be made to an Anglican Church of your choice, the Prince Albert Legion or a charity of your choice.
A private family service will be held at a later date.

One response to “Iris Basrab”