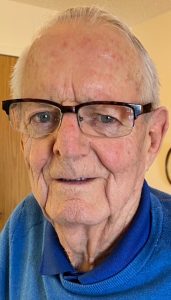 Ivan was born on May 15, 1933 to Lula and Jabez at the Britton family farm in Grandview, Manitoba.  Ivan was one of six brothers and three sisters.  He met Beryle in Wadena at a Halloween party in 1953 and both joked about each other wearing a mask!  They were married in Wadena in 1955 and lived in Preeceville, starting their family in 1956.  Four daughters – Debra, Brenda, Beverly and Donna and finally a son – Brent to round out the Britton family.
Ivan worked for the CN Railroad for 12 years and then as Town Administrator in Preeceville SK for 31 years.  He enjoyed hunting with his buddies up at Moose Camp, and always made time for family travels every summer across Canada and the United States.  He always said he would retire at 60 – rich or penniless.  They were fortunate to have been able to travel to Mesa, Arizona in the winter months, where they purchased a mobile home for 19 years, and welcomed family and friends.  They built a cabin at Nelson Lake in 1981; much to the grumblings from mom; but when it was completed, she loved it.  They spent the summers there until 2008.  It was a special place for family gatherings!  From there, they relocated to Saskatoon and have called Hector Trout Manor their home.  They made many friendships wherever they were and enjoyed life to the fullest.
He was predeceased by his parents, Lula and Jabez; brothers, Percy (Esther), Lorne (Marj), Clarence (Lillian) and Ronald; and his sisters Florence (Bill), Olive (Ken) and Elsie (Clarence).  His son-in-law Brian Bazansky and grandson Kyle Bazansky.
Ivan is survived by his wife Beryle of 66 years and 11 ½ months; and his brother Garth (Irene) and sister-in-law Joan.
Children: Debra Britton; Brenda Britton (Doug); Beverly (Mervin) Pederson – grandchildren: Ryan (Mandy), great grandchildren: Alexander, Hailey, Avery Pederson; Jeffrey Pederson (Sarah), Katelynn Pederson (Nick), Amy (Andrew) Manovich and great grandson Brayden;
Donna Britton (Dale), grandchildren: Tyler Bazansky (Nicole); daughter-in-law Danielle Bazansky – great grandchildren Nolan and Nash; Brittany (Kevin) Stringfellow – great grandchildren Ellison, Theo and Tucker; Brent Britton (Karlene) and grandson Blake. 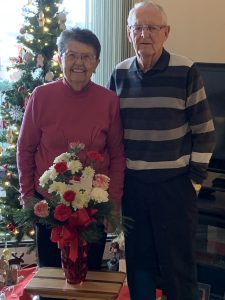