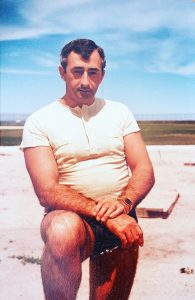 Dad was born in Trois Rivieres, Quebec on October 24, 1944. Being one of 19 siblings in a poor rural family, dad learned young that if he were to get what he wanted, he had only himself to rely on; this trait stayed with dad for the duration of his venturesome life.

Growing up in a Catholic family, dad was told by a priest at an early age, “Your contentious spirit will lead you to priesthood, or it will lead you to swing (the gallows)”. It would seem that dad would take the priest’s comment as a challenge, rather than a warning. From an early age, dad found himself in trouble with Corrections Canada, and remained in their custody for much of his life; we believe that he felt more at home in the institutionalized environment, and once released, he would quickly find a new misadventure to find his way back into the care of Corrections Canada.

Dad married our mom in Ottawa in 1979; mom recalls that they had no extra money at the time for a wedding or wedding dress, but the morning of the ceremony in their quaint apartment, dad came home with a beautiful blue dress for mom to wear. Instances like this are many when it comes to dad. He was a very generous man, offering what little he had in this life to help those who needed the help.

Dad had a brilliant mind, that – if he had been granted the opportunity – he would have done great things with. While life dealt dad a very difficult hand from the start, he used his intelligence to learn fluent English (having grown up a native French-speaker), read anything and everything, and play 300-point games of Scrabble. Anyone who knew dad knew that he had an amazing sense of humour; a quick, biting wit; and spoke sarcasm fluently as his third language. Whether it was pulling pranks or creating a feud for entertainment, dad never had a dull moment, regardless of his living situation, and always had his wheels turning for the next adventure or bit of mischief.

Dad was athletic all his life, participating mostly in body building and weightlifting. Dad would never miss an opportunity to show off his obscenely large biceps or to flex his pecs. While working construction, the small-but-mighty Frenchman loved to show up the other workers with the ease in which he was able to shovel and move around the wet cement. Dad was given the chance to find employment when Al Neufeld, Hague, met dad in the 1970s through a prison ministry program, Person to Person. Al and wife, Leona, took a chance on dad, despite his past, and employed him at his gravel company; they became lifelong friends, and we are forever grateful to the olive branch that was extended to dad.

Dad was very charismatic and charming, and took great pride in his appearance, with an impressive collection of clothes; his definition of fashionable may have differed from ours, however (who has 14 bolo ties?). When dad first came to meet mom’s family in Saskatchewan, he showed up to the little farmhouse wearing a white disco ensemble, shirt unbuttoned unfathomably far, and a gold chain. He looked ridiculous and completely out of place, and he liked it; he took every opportunity to be a spectacle.

Dad was very creative, and used this talent for wood carving, leather tooling, and drawing. Dad had beautiful handwriting, and was an avid letter-writer, as this was his only form of communication with us for many years; we always looked forward to receiving our letters from dad in the mail.

Like any good Quebecois man, dad loved watching his beloved Habs on TV, good food, strong liquor, stronger cigarettes, and heated arguments. Some of these interests got dad into more trouble than others, but he was steadfast in what he liked. As children — between mouthfuls of cheese curds and crackers — we also liked yelling at the TV with him when a fight would break out on the ice.

Some favourite dad stories that highlight his impulsive and adventurous personality include fighting a black bear in hand-to-hand combat on a camping trip with a group of Mennonite friends; packing up the truck with mom, their two big dogs, Café and Rex, and leaving their home in New Brunswick at 7 pm to settle West in Saskatchewan, with dad driving 24 hours straight that first night; taking an unauthorized “vacation” from Corrections Canada to spend a week living in Prince Albert National Forest, where lived out of a makeshift shelter, and survived off the meat of a goose he’d managed to hunt with his bare hands; eating onions like apples; at 63 years old, biking from Prince Albert to Rosthern on a whim to come have lunch with his daughter, Lise, and biking back again that afternoon; claiming to have finished third in “Canada’s Strongest Man” competition (we’ve unsurprisingly never been able to verify these claims); and operating a black-market liquor store out of his farmhouse in rural Saskatchewan.

We all had our ups and downs in our relationship over the decades, given his incarcerations and impulsive actions, but as we reminisce on our lives with him, there are many, many funny, happy, ridiculous stories and moments shared together. Growing up with Jean as our dad has made us the people that we are, shaped our personalities, and in the end, we are grateful that we had struggles along the way to strengthen our spirits and resolve. Dad was given an unfair hand from birth, part of which was passed along to us as our birthright – the goal is for each generation to be less pained than the last, and that was accomplished.

While incarcerated for all those decades, dad worked hard to help fellow inmates have a good quality of life while inside. Dad worked at organizing Family Days for the inmates and their families, arranged for fiddlers and traditional dancers to come into the prison and reconnect many of the inmates with their culture. While living on the Farm Annex (an offshoot of the prison where inmates live in a home-like setting to prepare for probation) at the Prince Albert Penitentiary, dad managed and maintained the rink, where inmates and their families could skate and play hockey, making family time “normal”. In addition to spending much of his life in the Prince Albert and Regina penitentiaries, dad also spent time at the Regional Psychiatric Centre in Saskatoon; here he worked hard and showed his leadership skills as he advocated for prisoner rights and advocating for family time for those incarcerated.

For the last six years of dad’s life, he worked hard to stay out of trouble, and was active in society. Living at Meewasinota halfway house from 2015-2019, dad made many friends and found old acquaintances from his time spent with Corrections Canada. Dad had an active social life, and knew everyone in the area, spending many hours each day walking and speaking to people he passed on the street. In 2019, dad became ill with ALS, and we moved him into a care home; it was a big change of pace for dad, and it took some time for him to adjust to the slower, calmer environment. In the end, dad made friends at the care home, just as he made friends everywhere he went his whole life, and as he lay on his deathbed on February 11, residents of the home came by his room to hold his hand, tell him they loved him and that he would be missed. It was wonderful to see that dad had made a positive impact on the lives of those around him at the end of his life. As dad’s ALS progressed, he lost use of his arms and hands, and having to rely on staff to feed him was difficult for him to accept. With his daughter, Lise, and his former wife, Marg, at his side, dad passed away very peacefully and painlessly while listening to his favourite song, A Whiter Shade of Pale. We will be forever grateful to the physicians who helped dad pass on in such a caring and peaceful environment; Scott and the rest of the team and residents at Meewasinota for lovingly kicking dad’s behind and keeping him in line when necessary; and to his parole officer, Belinda, for being not only his caseworker, but also a true friend. We as a family are very grateful to Marianela and the rest of the care home staff and residents for their love and care for dad over the past two years; it was the home environment he never had, and we are thankful for your support.

Dad is survived by his three children, Robert (Gillian), Lise, and Daniel (Heather), as well as Marg Fehr, the mother of his children. He is also survived by his three grandchildren, Ophelia, Oscar, William, with another on the way. There will be no services held for dad, but if you would like to donate on his or our behalf, please donate time and funds to mental health advocacy, clothing and funds to not-for-profit organizations, and donate your time to learn about privilege, inequity, prison reform, abolition of solitary confinement, mental illness, and addictions issues. 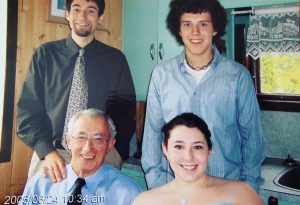