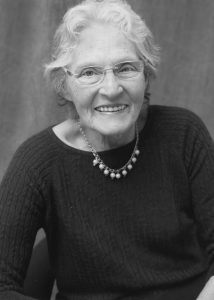 Joan Marguerite Carter quietly left this physical world the evening of May 20th, 2020, joining her husband Bob Carter in heaven.  She died peacefully after a short battle with pneumonia. In her final hours her son, Cal Carter (Carole Carter), spent the evening with her, bringing his own greetings and goodbyes and those of his sister Kim Wells (Craig Wells), brother Ken Carter (Melanie Carter), grandchildren Michael Goertz (Emily Hui), Amanda Goertz (Brock Tice), David Carter, Jennifer Carter and Rebecca Carter, none of whom could be with her due to COVID-19. She is also survived by her sister Geraldine Vance and her brother Gerald, and four great grandchildren, Leyla, Octavia, Leo, and Eva.

She was born in North Battleford, Saskatchewan on October 1, 1933 to her parents Evelyn and Marcel Vance, who predeceased her. Four of her siblings also predeceased her – Maurice, Margaret, Maxine, and Ken.

She and Bob, a schoolteacher living in Saskatoon, married on September 26th, 1953 and raised their three children, Kim, Cal, and Ken. In the early years, Joan was a part time secretary at a nearby school allowing her to be home most of the day when her children were young. Her astonishing typing speed of 125 wpm was put to use typing school papers on her old Olivetti manual typewriter.  In the mid 1960’s Joan and Bob built, by hand, a cottage at Emma Lake where the family spent every summer for the next 15 years or more. They built many family memories of fishing, playing board games, canoeing, and swimming.

When Joan was in her mid-30’s she began the second phase of her life. She finished her high school diploma at night school then enrolled at the University of Saskatchewan School of Physiotherapy where she earned her Bachelor’s degree. Upon graduating she worked in the Physio Department of University Hospital. Not one to sit still, she returned to school while still working, to earn her Master’s Degree in Continuing Education. She then joined the Faculty of the School of Physiotherapy as a professor of Kinesiology where she worked until she retired. She served as the President of the Canadian Physiotherapy Association. Her late-in-life start on her career, her fearlessness and strength were an inspiration to her daughter in her own later-in-life career.

Joan had many hobbies. She was a great seamstress and made clever Halloween costumes every year. She had an eye for color and a flair for decorating. She was talented at crocheting, knitting and embroidery and created beautiful stained-glass windows. She was passionate for antiques, laboriously refurbishing many beautiful old pieces of furniture. When Bob said she couldn’t buy any more antiques because there wasn’t any more room in the house, she bought irresistible pieces and hid them at friends’ homes until the “right time” to tell Bob. She and Bob were beautiful ballroom dancers and a delight to watch as they danced the tango or fox trot around the kitchen or living room.

Joan and Bob retired when she turned 50. They enjoyed many years together in retirement few of which could be described as slow or quiet. They had time to visit their grandchildren and great grandchildren making annual trips see them. To her grandkids she was funny, funky, and fun to be around. She made them feel special and very loved.

Joan lived in retirement the way she had lived her previous decades – with energy and enthusiasm.  She and Bob refreshed their old construction skills and learned some ones, building their dream home on their property at Emma Lake where the summer cottage had stood. It was furnished with her beautiful antique furniture. They lived there for more than twenty years before moving back to Saskatoon. They split their winters between the warmth of Yuma, Arizona, and Saskatchewan becoming serious cross-country skiers, training for and racing in competitions. During the winters in Yuma, Joan trained with a master stained glass artist helping him create a set of stained-glass windows commissioned by a Yuma church. To keep her mind sharp, Joan taught courses to the workers at the Prince Albert Weyerhaeuser Pulp and Paper Mill on how to work safely to reduce back injury.  She served as Chairman on the Board for Victoria Hospital in Prince Albert for several years.

She lived a full life. If she had a bucket list, there is a good chance she ticked most of the boxes. We will honor her in a memorial at a future date when the threat of COVID-19 has passed and those who loved her can gather to say goodbye. We will scatter Joan’s and Bob’s ashes together at the place they loved so much – Emma Lake.