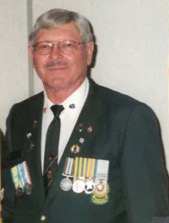 John was born to John Sr. and Tina on the family farm near Herbert, Saskatchewan. He attended school in the Wiebe School District and from the stories he told of his childhood, he enjoyed farming and caring for the farm animals. At the age of 18, he joined the Canadian Army and served for three years in the Princess Patricia’s Canadian Light Infantry. As a private, John served in the far east (Korea) and in Canada where he was certified in First Aid to the injured. He was honorably released from service receiving the Korea and UN medals.

During his working years, John served in a variety of occupations, farming being the longest. In his leisure time, he enjoyed dancing, golfing, fishing, hunting, food and laughter with family and friends.

John is survived by his wife of 65 years, Pauline and their sons Lionel (Janet) and Stuart. In addition to his parents, he was predeceased by his siblings Martha and Harry and his daughter, Judy.

John was a loving husband and father and a good friend to many.