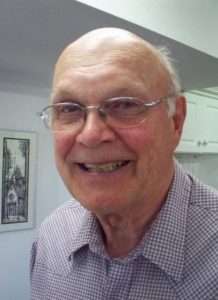 The family of John(Jack) East are sad to announce his passing on Dec.8, 2021. Jack was born on April 12, 1928 in Saskatoon, and lived here his entire life. Surviving Jack are his five children, Jack(Nancy), Barb(George), Bev, Robin(Kim), Rita(Marc), his loving wife of 39 years Margaret and her children John(Kim) and Jason, and numerous grandchildren and great grandchildren.  Also surviving Jack is his sister Eleanor(Gerry) and many nieces and nephews. He was pre-deceased by his parents, Mel and Ruth, his brother Bill, great grandchild Ethan, and the mother of his children, Edy.

These are some of the many ways we will remember him.  Dad was a hard worker.  He spent many of his years working in the family business (John East Iron Works) and several more in various positions before he retired. Dad was an adventurer.  He spent time in the Navy in 1948 working as a number one Gunner aboard the Athabaskan. He loved to ski, sled, sail, canoe, go on fishing trips with his brother, ride his motorcycle, travel and fly the various planes he owned over the years. At the age of 80 he went parasailing in Mexico. He became a pilot in his early 40’s and eventually earned his instrument and commercial ratings.  After a 10 year hiatus from flying after a heart event, he was able to re-qualify for his pilot’s license at the age of 84 and spent another year happily in the air.  Many reels of home movies attest to his interest in photography. Dad was a musician. He played the saxophone and could play piano by ear, thrilling us as kids when he would play the “boogie woogie”.  He loved his ice cream!  He was a dog lover, especially his little Max.  Jackfish Lake was his happy place. He spent his summers there from the time he was a baby, and made his home base there after he retired. After a diagnosis of Alzheimer’s life became more difficult for Dad.  He spent his final years living in Veterans Village at the Sherbrooke Community Centre. We thank everyone who was involved in his excellent care.

A Celebration of Dad’s life will be held next summer.  For those who may wish to do so, donations to the Sherbrooke Foundation would be deeply appreciated.

Fly high in sunny skies Dad! You will be missed.