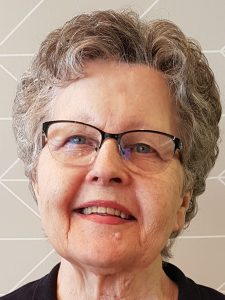 The Story of My Mom

I am deeply saddened to announce the passing of my Mom, Josephine “Josie” Baldry.  Mom passed away peacefully at Sunnyside Adventist Care Centre (Sunnyside) in Saskatoon.

Mom was predeceased by my Dad, Robert Mockford (1958), and my stepdad, Harold Baldry (1997), as well as her parents:   Lars and Louise Engebretson; brothers:  Lester and Sidney Engebretson; sister:  Wilma Wickstrom and special grandpuppies:  Riley and Brandy.

Mom was born and raised in Rose Valley, Saskatchewan.  After high school, Mom moved to Saskatoon and attended Saskatoon Business College.  In Saskatoon, Mom met my Dad, Robert Mockford, and they were married on July 6, 1957. Tragically, my Dad passed away on January 5, 1958.  After my Dad’s passing, Grandpa Engebretson told Mom to come home to Rose Valley to have her baby.  I was born on July 5, 1958 (on Uncle Lester and Auntie Alois’s wedding day).  Mom and I continued to live with Grandpa and Grandma Engebretson and Uncle Sidney.  Grandma often told me how they needed Mom and Mom and I needed them so there we stayed.

Mom spent her years in Rose Valley helping her parents and her Down Syndrome brother.  Mom was very active in the Zion Lutheran Church and was their organist for as long as I can remember.  Besides regular Sunday morning Church services, Mom accompanied the Church choir and played for many weddings and funerals.  She was also involved with the Zion Lutheran Ladies Aid and was always involved with the Women’s World Day of Prayer Services.

Grandpa Engebretson passed away in 1977 (I had graduated in 1976) and, in 1983, Mom, Grandma and Uncle Sidney (and Trixie the family cat) moved to Saskatoon.  I was thrilled to have my Mom so physically close again. They lived together until 1988 when Grandma passed away.  In the Spring of 1989, Uncle Sidney moved into Sunnyside and Auntie Edna took over as his primary Caregiver.  In the Fall of 1989, Mom met Harold Baldry, a widower, and they quickly became a couple.  Harold’s sons, Blair and Blaine, and myself wholeheartedly supported their relationship and they were married on February 2, 1990.  They had seven happy years together when, on February 12, 1997, they were in a car accident and Harold was killed.  Mom lived alone until January 2018 when she moved to the A1 Personal Care Home when her declining health prevented her from living independently.  As her declining health progressed, she moved into Sunnyside in July 2020.

Mom and I not only had a mother-daughter relationship but we were best friends.  We went to many concerts including Johnny Reid and Anne Murray to name a couple.  However, we were most in our element at curling championships, even if we disagreed on the best curler (Mom liked Jeff Stoughton and I liked Russ Howard).  We attended Briers, Scotties, Men’s and Women’s Worlds, Continental Cups, Grand Slams and, our favorite, the Olympic Curling Trials.  We of course, as women do, enjoyed shopping, going out to restaurants, and, on every Friday, Mom having her hair done with Tania Friesen, something which Mom enjoyed immensely.

I often told people that God gave my Mom dementia so I would lose her a little bit at a time and, when the time came, I would not be so devastated by her loss.  Dear God, it didn’t work; I am still devastated!

My heartfelt thanks to everyone involved in Mom’s care including A1 Personal Care Home, Sunnyside and Cherished Moments.  To my husband, Glen, thank you for being a wonderful son-in-law.  Glen has always said, that when he married me, he knew it was a package deal, me and my Mom.

Mom is at peace now, with all her memories intact, and will forever have my undying love and gratitude.

Mom, I love you more! – Your daughter, Roberta

*Mom has been cremated and I am taking her ashes home with me until a final resting place is determined.  A memorial service is not planned.  Flowers are gratefully declined.  In lieu of flowers, please consider a donation to your favorite charity.