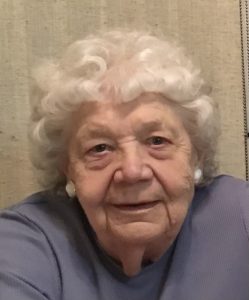 Josephine Gloria Thiessen 90 years of Langham SK, passed away peacefully in her sleep on December 3, 2021.

Mom graduated from Technical School with her grade 13 in accounting and went to work for Federated Co-op and Bowman Brothers, keeping books and did a brief stint as a dispatcher for a local cab company in Saskatoon.

Mom was an avid ball player and a dynamite bowler, bowling a perfect game with her league in 1953. Mom loved music, she even sang on the radio with her two sisters Milly and Mickey and lifelong friend Arnold Boschman, winning the amateur talent night at the old Victory Theatre

At family gatherings there were the Stahl women in the kitchen singing as they prepared the food accompanied by their brother Wayne adding his deep rich bass voice.

Mom had a special deep bond with all of her siblings after losing their mother in 1955, and mom helped her father raise her youngest sister Teresa and her brother Wayne. Any time mom got together with any one of her siblings or all of them as a group they could often be seen standing in the kitchen crying they would laugh so hard that they would literally put each other into tears

Mom met the love of her life Henry S Thiessen at a dance at the Legion Hall in 1952 and they were married on December 9, 1955, two days before Dads birthday. Dad always said mom was the best birthday present ever. They were married 63 years before dads passing in 2019.

Mom and dad moved out to the Thiessen family farm in 1963 where they resided until 2008 when they moved into Langham. While on the farm they raised three children Gail, Lorna and Scott

Mom worked in Langham during their time on the farm with Ian Stoken‘s office and with Waldners  Tax Service.

After mom and dad moved to the farm there was always a host of Thiessen nieces and nephews coming out to help on the family farm for the summers and at harvest time.

Mom always had a huge garden and was a fabulous cook and baker.  No one could or ever shall be able to make Rollkuchen like her.

Mom was especially proud of her Hutterite/Prairielute heritage and was keenly interested in gathering information on the history of her ancestors. She was one of the organizers of the Prairielute reunion in 1997 in Langham, and was recognized at the 100th anniversary of the Emmanuel Country Church in 2017 as the oldest living grandchild of Andrew A Stahl,  the first minister of the church.

Mom is predeceased by her parents Andrew B and Mae Stahl,

her sister Mildred Kluey, and her sister Teresa {Jeff) Walker

A Celebration of Life will be held at a later date to be announced.

One response to “Josephine Gloria Thiessen”