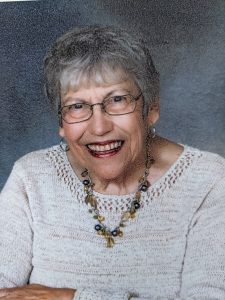 Yvonne spent the first 6 years of her schooling in Tuberose and then the rest of the time in Elrose except for a partial year at the convent in Rosetown. She attended Teachers’ College in Saskatoon and taught elementary school in Kyle for 3 years and then moved to Scarborough, Ontario where she taught until June of 1967. She attended Bible School at Briercrest, Saskatchewan, for 3 years followed by 4 years back in Ontario teaching in Guelph. In the summer of 1974 Yvonne moved to Grenville Chrisitian College near Brockville, Ontario where she taught until 2003. While there she was diagnosed with Hodgkin’s Lymphoma stage 4 and had chemo treatments. She never tested positive again for cancer but needed both hips replaced.

Music has always been an important part of Yvonne’s life. She took piano lessons and learned to “play by ear’.  She learned to play the clarinet and the snare drum in the Elrose Band. With Dad on the banjo and Yvonne on the piano, we had many singalongs in our home. During her teaching career at Grenville, several of her recorder groups did well at music festivals. She was also part of Gilbert & Sullivan productions. She even wrote a musical about the history of Canada called “Carrying the Torch”, and had her school choirs perform it. Yvonne also enjoyed writing poetry.

When she returned to Saskatoon in 2009, she moved into Luther Tower where she started a choir which she continued to lead after moving to Luther Heights and started another choir there, travelling back and forth on Access Transit. While at the Tower, she also volunteered in the music program at nearby Brunskill Elementary School.

Yvonne enjoyed travelling and some of her adventures took her to Hawaii, Alaska, Europe and The Holy Land. She enjoyed entertaining people in the many places where she lived. In March 2019, Yvonne took up residence in Extendicare Nursing Home and was there until January 2020, when she moved into St. Ann’s Nursing Home. It was there that her health deteriorated to the point where she was unable to walk and then unable to feed herself. She endured a lot of physical pain but also experienced much joy in both locations. Even though she experienced confusion and loss of memory after her Alzheimer and vascular dementia diagnoses, she was very aware and able to converse with us until the end. Her final week was spent in St. Paul’s Hospital. The family is thankful for the excellent care she received at St. Paul’s as well as St. Ann’s and Extendicare.

Yvonne’s faith in and love for Jesus were the anchors in her life. She faithfully attended St. Stephen’s Anglican Church where she loved the worship, the Biblical teaching/preaching and the people. Yvonne participated in all of church life there. Many thanks to the loving and caring people at St. Stephen’s.

If you would like to view the beautiful service that was held for Yvonne,  please use the link  https://youtu.be/pJKPyV44NNc