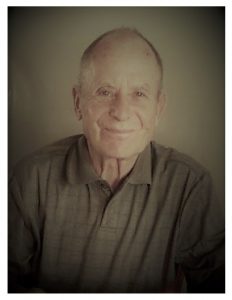 Ken was born in 1929 and grew up in Gallivan and then Maymont where at 17 he began working with the CNR which took him to Saskatoon where he met Shirley. Eventually they married in Beatty and lived in Melfort and started a family there. From there were stops in Brooksby, Maymont and Rosthern as a Station Agent and then Saskatoon as a Dispatcher where he worked until he retired.

Retirement allowed Ken & Shirley to travel with friends and Ken became involved with many organizations as a volunteer. Ken worked with the Refugee Committee at McClure Church which sponsored many families that in-turn became second families to Mr. Ken and Mrs. Shirley as they were affectionately called. Ken was involved with many other organizations including Open Door Society, Riversdale Kiwanis Club and Chimo Chordsmen. He was recognized for his work volunteering when he was awarded as Saskatoon’s “Citizen of the Year” in 1996.

Family was the most important thing in Ken’s life.  He spent many years supporting his kids and grandchildren in their activities. Huskie Hockey was a passion that remained to his last days as he always inquired about the team and the new rink.

Ken loved to have his family around, taking drives in the country, skating on freshly frozen ponds, riding his bike, playing hockey and having coffee with friends until his health restricted his activities in his last few years.

The family thanks all of the staff at Samaritan for their compassionate care of Ken this last year and the nurses and doctors at the Saskatoon Cancer Clinic.

We will miss him with all our hearts, but celebrate our time and memories with him. Ken leaves behind his loving wife of 65 years Shirley, children Doug (Val), Barry (Karla), Tom (Margie) and Bev (Dave) and grandchildren Cory, Adria, Jessalyn, Sean, Angelle, Madison, Max, Eric and Josie as well as his brother Alan and sister Margaret (Scott) and numerous nieces, nephews and many many friends.