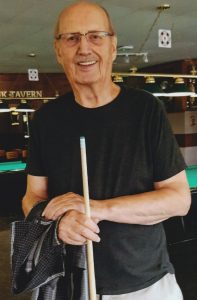 Lawrence Carl Otto Qualman of Dundurn and Saskatoon, Saskatchewan died peacefully at the age of 92 in St. Paul’s Hospital the morning of Thursday, July 21st, 2022.  As he was throughout his life, in his final two weeks, spent in hospital, he was surrounded by his family.
Lawrence is survived by his wife, Gayle (Berry); his daughter Lori Neuberger and her husband Andy and their two children Alexandra and Evan; and his son Darrin.  Lawrence is also survived by his brother Ken, his sisters Verlie and Viola, and many nieces and nephews.
He was predeceased by his mother and father, Christine and Roland Qualman of Dundurn and his sister Gerry of Saskatoon.
​​​​​​​Lawrence was a successful farmer and loving and generous husband, father, and grandfather.  He was deeply engaged in life, colourful, interesting, and interested.  As one person who knew him said upon his passing: “He was one of those one-of-a-kind Prairie folks who give colour to the world.”

Lawrence was born on February 10, 1930 and grew up on a farm 7 miles northeast of Dundurn.  He attended Pleasant Point School and Nutana Collegiate.  He met his wife Gayle in 1958 and they purchased their farm in 1959.  Gayle and Lawrence expanded the farm and were innovators in agriculture.
Lawrence enjoyed cars and over the years owned an Oldsmobile convertible, a Mustang, and several Lincolns.  Lawrence and Gayle took dance lessons for many years and were successful in competitions.  After he retired, he enjoyed playing pool and became very skilled.  Gayle and Lawrence enjoyed their motorhome and took many trips across North America to visit Lori and Andy and their grandchildren or to go on adventures with friends.  Their travels took them as far afield as Alaska, Mexico, and Newfoundland.
Lawrence was an autodidact—a self-taught intellectual.  He loved books and passed that love onto his son, Darrin.  Lawrence read constantly, loved Harper’s Magazine and various news channels, and could always be counted on to provide an opinion of anything that was happening in the world.  He enjoyed a spirited discussion—a debate.
In his later years, Lawrence became a bit of an amateur food critic and could be counted upon to provide corrective feedback at his favourite restaurant, Gibson’s Fish ‘n’ Chips.  Lawrence could also be counted on as a partner and advisor in sometimes-4-AM cabbage-roll-making sessions with Gayle.
Gayle and Lawrence were helped greatly in their later years by neighbours Dave and Diane Larkins.  Dave could be counted on to clear the snow from Lawrence and Gayle’s driveway and then join them for a visit and good discussion.
Lawrence’s family members are taking some time to remember and appreciate his life and will be hosting a private celebration in August.  Gayle, Lori, and Darrin extend their profound gratitude to all the wonderful people who were part of Lawrence’s life.