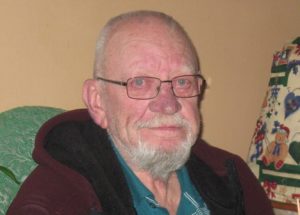 Len was born in Maple Creek SK on Feb 20, 1938 to Perry and Tillie (nee Matilda Covlin) Hudson of Consul SK.

Len took his schooling at Consul and Eastend SK.  He later received his Interprovincial Ticket for Carpentry at the Saskatoon Kelsey Campus.  In 1959, Len married Mary Oliver of Crichton SK and together they raised their three daughters – Glenda, Kari & Leora.  He worked in the carpentry field for many years including such projects as the Murray Library on the U of S campus, Midtown Plaza, the first McDonald’s and the Saskatoon Public School Board.  In the late 1970’s Len was hired by CMHC as a Compliance Inspector in Saskatoon.  In 1992 CMHC transferred Len & Mary to Vancouver Island where he worked out of the Victoria office but lived in Nanaimo.  On Mother’s Day 2001 Len suffered a stroke that put him on long term disability and then early retirement.  In 2002 they moved back to Saskatoon.

Len enjoyed woodworking, knitting and tinkering around in his shop.  He is sorely missed by those that loved him. There will be no service at this time.

One response to “Leonard Hudson”