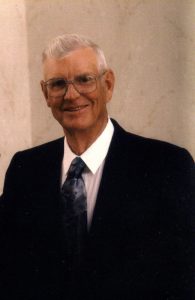 Art began farming with his brother Roy at age 15, and their partnership continued until 1982. He then farmed with his son Neil until 1998. Art married Ruth in 1946 and after her death in 2001, he married Adele Thompson in 2003.

Art’s life was one of service, first to his family, then to the community of Viceroy where he sat on a variety of boards, including the Credit Union, Viceroy Coop pasture, and Recreation Board. He refereed, umpired and coached hockey and baseball.

He was gifted with mechanical skills, an analytical and inventive mind, and an aptitude to learn. He and Roy built and adapted equipment together that benefited their farm operation. He was in his 80s when he learned to use a computer.  Even in his 90’s, he continued to build his skills at contract bridge.

Art and Ruth discovered the joy of square dancing, making many friends and dancing throughout Saskatchewan, across Canada to the east coast, and then to Australia. Even in hospital, Art teased the nurses that they needed to learn the heel-toe polka.

Later, he and Adele enjoyed spending summers at Thomson Lake where they danced, visited family and friends, watched baseball, and suffered through the Roughriders’ ups and downs.

Art greatly valued his friendships and found it painful to have outlived so many of his friends. He was grateful for good friends at the condo and beginning friendships at Luther Riverside Terrace in Saskatoon.

A celebration of Art’s life will be held at 2:00 PM on Friday, October 12 at The Willows, with interment later at Viceroy.

His family is grateful to Adele and the Thompson Family and also for the excellent care Art received from the staff at St. Paul’s Hospital and Luther Riverside Terrace.

Donations may be made to the St. Paul’s Hospital Foundation.