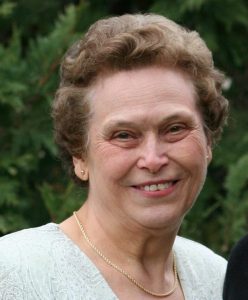 It is with heavy hearts that we announce the peaceful passing of our Mother, Lillian after a brief but courageous battle with cancer.

Also left to cherish her memory are numerous nieces, nephews, and friends.

Mom was predeceased by her parents John & Clara, her husband of 40 years, Archie Clark, grandson Justin Biller, son-in-law Roland Morin, as well as all of her siblings and their spouses Elizabeth (Peter), Frank (Bernice), Rose (Elvin) and her 2nd husband, Gerry Kennedy.

The family would like to thank Dr. Brian Martens, Dr. Viv Walker and the St. Paul’s Hospital Palliative Care Unit for their incredible care of our Mom.

Due to Covid restrictions, there will be a private family service entrusted to Cherished Memories Martensville. (306) 242-7888

Mom was born the 4th and youngest child of John & Clara Kroschinski on September 1, 1939, at Wilkie Union Hospital.  She was the first of the Kroschinski family to be born in a hospital as her siblings Elizabeth, Frank, and Rose were all home births. There was a lot of confusion in the hospital the day that Mom was born – it was also the day that WW2 broke out.

Although Mom was the 4th  child in the family, her sister, Rose, who was the closest in age to her, was 16 years older than Mom.   Her mother Clara, was 40 years old when Mom was born, which was fairly old to be having a baby back then!  Mom essentially grew up as an only child, however, she always said it was more like having 4 sets of parents because her siblings and their spouses treated her like their own child instead of a sister due to the age difference.

Mom grew up on the family farm near Wilkie receiving 2 years of schooling at Narrow Lake and Starview Schools before moving with her parents closer to Wilkie, where she completed her education at McLurg School.

Mom often spoke of helping Grandpa on the farm and how proud he was of his daughter who worked just as hard as any boy could.  She also learned alongside Grandma in the kitchen the skills of baking bread, pies, Kase Knepflas, and was capable of making full meals at a young age.

During her high school years, Mom spent the winters with her Grandma Jaschinski in the town of Wilkie.

Her Grandma spoke very little English and Mom knew very little German.  Somehow they seemed to manage well enough aside from a few misunderstandings along the way.

Her Grandma was extremely devout, which meant that Mom was required to go to confession each week, attend mass every Sunday, and pray the Rosary daily.  Mom did not find these challenges to be much of a burden because she did enjoy the time she spent with her Grandma, helping out where she could.

Mom always loved spending time with kids!  She started babysitting her nieces and nephews at a very  young age.  It was not uncommon for Mom to stay at Aunt Rose’s to help her with her 8 kids whenever needed.

Mom also had a soft spot for animals.  She had many animals on the farm that became her pets.  She was particularly proud of her pet rooster that would lay in her arms and fall asleep and was also trained to pull a little wagon.

When Mom finished high school, she started working for SaskTel as a switchboard operator in Wilkie.   She often spoke of “rubbernecking” which was listening in on peoples phone conversations that took place on party lines.  She said it was always interesting to hear who was “hooking up” with someone they shouldn’t be.

She later accepted a transfer with SaskTel to Saskatoon and moved into a 1 bedroom apartment with her oldest niece Joyce, who she had to share a bed with!  The girls enjoyed the excitement of big city life and going to dances at the Hat.

It was during this time that Mom and Dad met at Pioneera while Dad was braiding horse tails and looking after the oxen.

Mom continued working at SaskTel until she married  Archie in 1961, when she became a full time mother and homemaker.

In 1961, Kevin was born.  At that time, Mom & Dad  became live in caretakers for the Western Development Museum on 11th Street West.  They lived in a 2 room “shack” with no running water and an outhouse in the middle of the city on the Pioneer Grounds.   Deb was born in 1962, Rod in 1964, and the family was completed in 1969, with the birth of Shelley.  Money was scarce for the young family on a single income yet somehow, Mom & Dad managed to feed and clothe 4 children, often sacrificing their own needs to provide for us.

While living in the “shack”, Mom decided that chickens would be a good idea to help stretch the family food budget.  The chicks were ready to be picked up at the hatchery, but there was also plans for a trip to Wilkie to visit family.  Mom was never one to go back on a plan, so the chicks were picked up and travelled right along to Wilkie for the weekend.

Mom’s love of animals continued well into her adulthood and transferred to her kids.  If any of us came home with a request for a dog, a cat, rabbits, turtles, or even ducks, it was never rejected.

In about 1973, the family moved into much larger accomodations. The “old” Western Development Museum hangar was no longer open to the public and the offices were renovated into a family home for the caretakers. We had a massive yard with a home made golf course, hand dug “swimming pool”, skating rink, and a skidoo.  There were also multiple indoor play areas, that technically were off limits to us, but as long as Dad never caught us, it was all good!  Mom would  yell into the hangar when Dad was about to get home just to warn us to get out of whatever mischief we were up to at the time.  Looking after all of this indoor and outdoor space was undoubtedly quite the challenge with people constantly coming to the door with questions while Dad was at work and Mom was forever giving directions to the new location all while trying to keep the kids from getting into too much trouble.

The family did not have money to spend on fancy vacations, but did spend their fare share of time camping at various lakes in Saskatchewan, Flin Flon, and into BC.   They also travelled frequently to Wilkie to stay with Mom’s parents.

They lived at the “old Museum” until 1978, when Mom & Dad purchased their first home a few blocks away on 11thStreet West.     As time went on, the kids married and had children of their own which was definitely one of Mom’s greatest joys!  Rod & Marge welcomed Jessica, Lianna, Jonathen, & Larryssa.  Deb & Roland added Jeremy & Mitchell, and Shelley & Brad completed the grandchildren with Travis.

The grandchildren all meant the world to her, each one in their own special way.  She enjoyed babysitting the grandkids and having them for sleepovers.   It was a special time for each of them to stay at Grandma’s and have “late night party nights” while she read over and over every Little Critter book requested.

She loved to garden.  In fact, she kept a successful garden every year right up until 2020.  She had a competitive nature about her garden too.   She would always ask “how’s so and so’s garden?”, “Are their carrots up yet?”

It was also about this time when Mom’s interest in geneaology took hold.  She spent countless hours, in fact, years investigating and retracing  her family tree.  She was always delighted with any new developments on the Kroschinski side, no matter how insignificant they may have seemed. They were all important pieces to the family puzzle in her eyes.

In 2001, Dad passed away and Mom stayed alone in the house on 11th Street.  The grandkids’ visits and sleepovers became even more important and enjoyable for her.

In 2008, she met and married Gerry Kennedy.   She sold her house and moved into his house in the King George area.  They enjoyed going to dances and travelling together.  During their marriage, Mom experienced her first plane ride to Cuba, an Alaskan cruise, and a bus tour to the Maritimes.  It was during this bus tour that Gerry suffered a medical emergency and passed away 2 months later.

By this time, the grandkids were grown and no longer required babysitting.   For the first time in Mom’s entire life, she did not have a pet of her own, so she took great pleasure in dogsitting her “grandpuppies” Sophie,  Yoda & Einstein.

To Mom’s delight, Great Grandchildren were added to the family! Although her advancing age kept her from babysitting another generation, she certainly enjoyed when Lorelai, Rylee, Sydney, and Alex came to visit.

Mom accomplished a few more of her “bucket list” items along the way.   She went fishing for the first time at Candle Lake with Kevin in 2018, and caught a very TINY fish!  She was beyond ecstatic!  It was definitely an exciting moment for her and was an event she spoke of often.

She was also taken for a ride up and down her alley on the back of Jonathen’s motorcycle while in her late 70s, which scared the life out of her, but she was excited for the adventure!

Mom continued to live in Gerry’s home after his passing, looking after the house and yard on her own until her cancer progressed to a point that she required 24 hour care in her home.   She was admitted to St. Paul’s Hospital Palliative care ward where she received exceptional care from all of the staff on the unit and passed away peacefully on March 12, 2021.

We were fortunate to have had her with us and in good health for many years.  She was always ready and willing to help any of the family out with whatever was needed.   She will be missed greatly by all who knew her and will be forever  in our hearts.

We love you Mom!