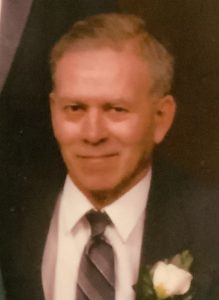 The family of Lloyd John Bloomquist is saddened to announce his passing on Tuesday October 19, 2021 at Sherbrooke Community Centre, Saskatoon at the age of 84 years.  Lloyd is survived by his two sons: Graham & Tracy and their son Caleb of Outlook and Evan & Leah and their daughters Emerson, Kerrigan and Harper of Martensville; sister Audrey & Ernie Rawlyk of Saskatoon and their children Rob Rawlyk of Rheda-Wiedenbrück, Germany and Kara & Brent Gebhardt of Lloydminster and their children Holly, Joel, Maria, Sam, Gianna & Tim.  He was predeceased by his wife Jean (2008), mother Edna (2002) and father Clarence (1988).

Lloyd was born on the family farm near Perdue in 1937.  He spent many years farming, enjoyed woodworking, curling and fishing.  On October 26, 1968, he married Jean and they raised their two sons on the family farm near Perdue before moving to town in 1995.  Lloyd suffered a stroke at the age of 47 which left him with limited mobility, but he continued gardening and staying active until Jean’s death.

Lloyd loved his grandkids and often had a stash of treats waiting for them when they visited, or he sent them home with Graham or Evan.  He always enjoyed a hot coffee with his boys and Audrey and Ernie as well.

Lloyd’s family would like to extend a thank you to the staff at Sherbrooke Community Centre for their compassionate care to Lloyd and family in his final days.

A Memorial Service for Lloyd will be held at Cherished Memories Funeral Home in Martensville on Saturday, October 30th at 1:00 PM.  A private family interment will take place at a later date.

One response to “Lloyd Bloomquist”