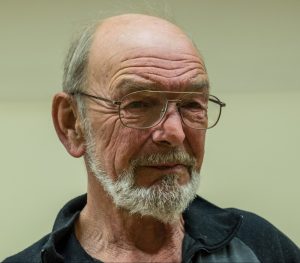 Sadly we announce the passing of our brother and uncle, Lyle Palmer Mohn, on January 21 at Royal University Hospital in Saskatoon.
Lyle was born on May 13, 1951 in Birch Hills, Saskatchewan and grew up in the Tiger Hills/ Birch Hills area.  He graduated from high school at Birch Hills and immediately went out to B.C. to work.  He worked in the Quesnel area and then moved to the lower mainland with his widowed mother.  They lived in Delta, B.C. for many years.  He worked in the auto service areas of several dealerships until his retirement. He also served as his mother’s primary care giver following the death of his step-father.  Lyle returned to his birth community of Birch Hills in 2010.
Lyle acquired an acreage on his father’s former home quarter section and loved being there until his final hospitalization.
He enjoyed helping friends and neighbours with mechanical, electrical and plumbing issues, putting their needs ahead of his own.  As his brother Bruce said, “He would do anything for anybody.”
Lyle is survived by his brothers Bruce and Duane (Mary), his two nephews Kent and Tyler and his three nieces Nicholina, Lindsey and Erica and their families.  He was pre-deceased by his father Oscar, his mother Lois and his stepfather Ashley Smith.
He was a very skilled photographer.  His hobbies included golfing and curling.  He was an active member of the Royal Canadian Legion in Birch Hills.   His life will be celebrated at a Legion Memorial service later this year.   No date has yet been set.
Anyone wishing to make a memorial donation may do so to the Prince Albert branch of the Society for Prevention of Cruelty to Animals, 1125 North Industrial Drive, Prince Albert, Sask. S6V 6J9 or to the Royal Canadian Legion Branch #122 Poppy Fund, Box 96, Birch Hills, Sask. S0J 0G0.