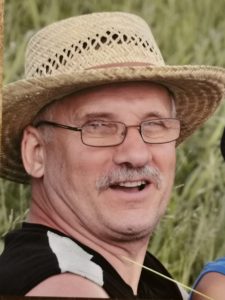 Marek Polanski was born in Poland in the town of Malczyce on Apr 2, 1958. Since he was a young man, he was a deep thinker and a reader. He enjoyed books, ufology, space travel, unexplained mysteries, sketching and drawing, nature, trees, plants, gardens. Even as a child he would point in his books to Canada and say to his mom, “This is where I need to go one day, where huge forests grow, the land of rivers, lakes and magnificent mountains.” As a young man, Marek was an athlete and was a speed skater on the Polish National Team. He took pride in the fact and liked to talk about how fast he was as a speedskater.

Marek married Wieslawa or Wiesia in Poland and had two daughters. He emigrated to Greece in 1987 where we joined in one year later. Marek’s goal was to come to Canada, and he settled in Saskatoon, in 1992 with his family.

In Canada, Marek decided on becoming a Semi Driver for an occupation. He chose this career because it offered the freedom to travel and see parts of Canada and the US. He worked for a company based out of Calgary called Varspol Trucking where he had many good friends.  His friends spoke so well of him, they said “Your dad is a very smart man, and a good man.” Marek was always a good conversationalist, he had an easy-going attitude, his positive kind energy and he was full of interesting ideas, he was never boring.

He was loved by many, he was an honorable man, he was fair, kind and loving. Marek was a forgiving and righteous man who always wanted to help others. He was very spiritual person and disliked materialism. He had a kind heart, was charismatic, strong, he had mental toughness and so much courage. He was not afraid of anything, not even death. Marek believed in the afterlife.

He is survived by his daughters Kasia Solomon and Justyne Kope. His grandchildren Maya and Mateo Solomon and Julian and Bruce Kope. His sons-in-law Zachary Solomon and Jesse Kope. And his ex-spouse Wieslawa Polanska (Raczka). His family in Poland includes his parents Juzefa Polanska and Henryk Polanski, Sisters Terasa Maciejewska and Wanda Raciborska.

Marek was a great father and grandfather. We all thought of him to be best dad and grandpa in the world.  He was always there for us. He got us through the most difficult times in life. He was an amazing person, he was our rock, our strength, our teacher, our moral guide. He taught us so many lessons in life.

Goodbye Marek. We love you so much. We will miss you.

One response to “Marek Polanski”