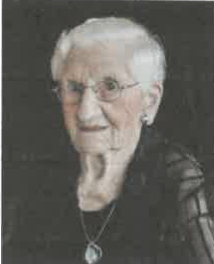 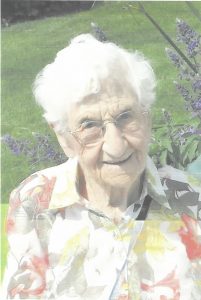 Margaret passed away peacefully May 15th, in Saskatoon, SK, at the age of 103.

Margaret was born in Englefeld, February 23, 1917 to parents Gerhard and Rose Herriges. Margaret remained in Englefeld, married Ferdinand Nordick and raised five children primarily on her own, after Ferdinand’s illness. In 1968 Margaret moved to Saskatoon. She worked for a time in a care facility and later became one of the first educational assistants supporting students with special needs for the Greater Saskatoon Catholic School system, a position she enjoyed until her retirement at the age of 70. Many students benefited from her “grandmotherly” care.

Eventually Margaret moved to Columbian Manor. There she was involved with the social and liturgical committees, maintaining a very active role until well into her 90’s. At the age of 102 Margaret moved to a Personal Care Home and recently to Oliver Lodge where she remained until the time of her passing.

Mom’s devotion to her family, her self-reliance, steadfast faith, and strength of character were recognized and admired by many.

Margaret was pre-deceased by her parents, her brother Gary, her sister Mary, and her husband Ferdinand. Margaret will be missed and lovingly remembered by her sons; Gerald (Loraine) of Sherwood Park, Ken (Diana), Roland (Diane), her daughters; Maureen (Rick Brundson), Myrna (Daryl Bourk) all of Saskatoon, as well as 10 grandchildren, and 14 great grandchildren.

A private celebration of Margaret’s life will be held at a later date, followed by interment at Woodlawn Cemetery.

Donations of remembrance may be made to Columbian Manor, K of C, or your church/favorite charity.