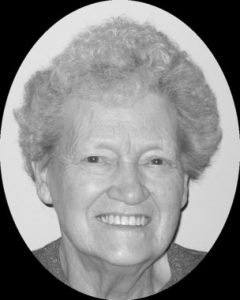 Joyce Brown was the eldest and last survivor of the five children born to Bessie Mae (Pridmore) and Harry Alexander McDonald. Born in Kisbey, SK, Joyce grew up in Abbotsford, BC, where the family relocated to at the beginning of the Great Depression. After graduating from Normal School in 1949, Joyce began teaching on Langley Prairie where she met and married Ted Raymond Brown on Aug. 8, 1951. Although Joyce was born to be a teacher, she was required to stop teaching when she became pregnant the following year.

Ten years later a different school board was overjoyed to discover that a mother with 6 children under the age of 9 might agree to be the teacher in the one-room school on Denny Island, BC. The fact that her 3 school-aged children kept the school from closing due to insufficient enrolment, was surely part of the decision process. Joyce later taught in Ocean Falls, Bella Coola, and finally Langford on Vancouver Island, where she retired (briefly!) before taking up teaching again in Fort McMurray, AB, from where she retired a second time to Saskatoon.

Joyce was an active member of the Church of Latter-Day Saints. In retirement, she and Ted served as missionaries in Mississauga, ON. After Ted’s death on September 21, 1998, Joyce lived for a few years in Parksville, BC, before returning to the Saskatoon area to live with son, David, and care for his young family.

Per Joyce’s wishes, in lieu of flowers, a donation to a charity of your choice is preferred.

One response to “Mary Joyce Brown”